New Let’s Get Ready To Rumble Slot By Relax 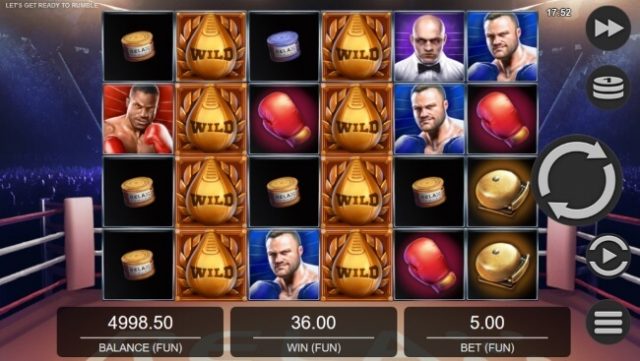 Boxing was every bit as big in the 1980s as what it is today. The 80s after all gave us the famous catchphrase, “Let’s Get Ready To Rumble”.  So popular did the sing-song turn out to be that it eventually served as the official opening to boxing matches all over the world, leaving many of us to remember the phrase but not who played and who won. And so Relax Gaming’s decision to team up with legendary ring announcer Michael Buffer and incorporate the catchy phrase the title of its latest slot release seems a genius move indeed.

Let’s Get Ready To Rumble was developed in association with the famous American ring announcer and is officially the first network game to feature the legendary catchphrase, something that is apparently particularly warming to the cockles of the Malta-based developer’s heart.

Money To Be Won

But the latest slot about more than just a famous phrase as there are multiple opportunities to win. The slot offers to players the opportunity to win up to 2349.4x their original bet. Now that’s not something to be smirking at, and not by a long shot!

Let’s Get Ready To Rumble is jam-packed with moneymaking features, including respins, stacked wilds and additional free spins. These are encapsulated in 3 signature special features included in Let’s Get Ready To Rumble. The special features are Rumble Spin, Sticky Respin and Wild Stacks and each feature appears even more eager to drop the hat and pay out than the next.

The game is yet again a celebration of simple rewarding play and the inclusion of the additional features rounds it all off rather nicely. There is no shortage when talking big-win opportunities and the bet multiplier really sees to that.

Buffer The Star Of The Show

Relax follows an open access platform model. Over the course of recent months, the supplier-developer has added literally hundreds of new games to its proprietary platform. Some of the games on offer are from the ranks of third-party suppliers and casino games developers and others were created in-house by Relax Gaming’s own Silver Bullet and Powered By development teams.

Chief Product Officer Simon Hammon is excited beyond measure about the inclusion of Michael Buffer’s persona. Hammon referred to Buffer as the face of American boxing and said that his inclusion is proof yet again that Relax Gaming is at the absolute forefront of brand-establishment.

Are YOU ready to rumble? Play the BEST online slots TODAY!