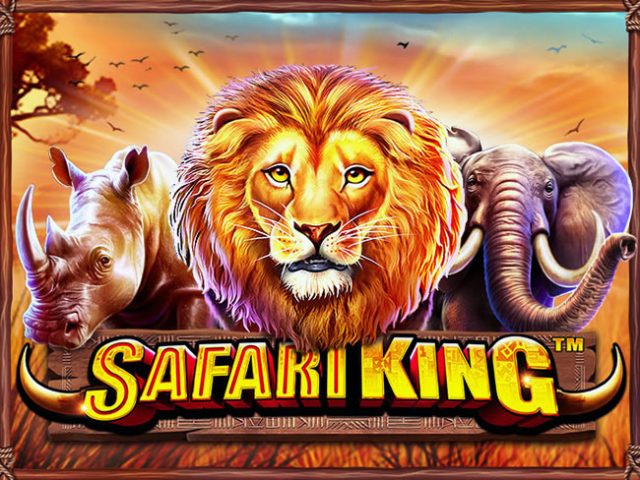 On February 21, Pragmatic Play’s new Safari King slot officially made its premier at online casinos across the globe. The fresh, African safari-themed title boasts a 4×5 game grid and 50 adjustable paylines, not to mention special bonus symbols, free spins, wilds, and much more!

When looking more closely at the reels, players will find symbols that perfectly match the new slot’s wild theme, including Savannah animals like antelope, zebra, cheetahs, elephants and rhinos. The higher paying symbols are the rhino, elephant and cheetah, while a range of themed playing card icons provides lower wins.

The king of the jungle himself – the mighty lion – acts as the wild symbol in Pragmatic’s most recent release. In the base game, the lion wild can fill in for all other symbols on the reels to complete a win, except of course the bonus icon. His symbol can be found on the second, third, fourth and fifth reels at all times.

The bonus symbol will appear in the shape of a blue circle encased in the center of a yellow block. This icon appears on the first, third and fifth reels throughout the game play, with three or more of them offering scatter pays of 4x players’ stakes. Landing three of these icons will also immediately award 8 free spins, along with the chance to earn more.

During this special free game round, players will also find that there are extra reels that come into play. Every spin that takes place will transfer one wild symbol to the second, third, fourth and fifth reels, and these wilds will remain sticky for the entire round to help form extra winning combos. More spins will also be awarded during the feature for landing extra bonus icons, and there is no limit on how many extra spins can be earned here!

The new Safari King online slot will also be joining another of Pragmatic’s recent releases: Treasure Horse. The latter game was released at the start of February this year, and boasts a 3×3 grid with scatters, wilds, and a slew of interesting bonus rounds to explore.

Among them is the Golden Treasure Horse feature, which can award multipliers, cash wins, and entry into a special free spins round. Clearly, there will be no shortage of excellent online slots from Pragmatic Play for Canadian players to enjoy this year…