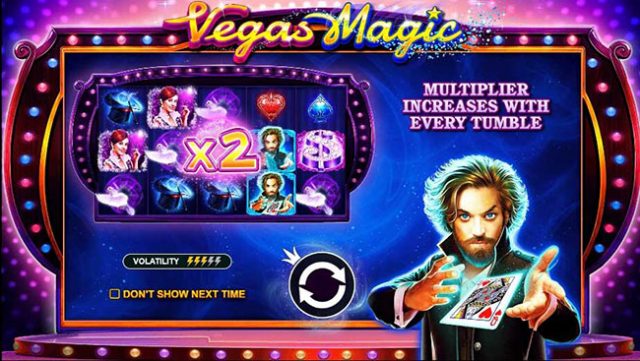 The world’s best gaming software developers are always on the ball when it comes to exciting new releases that will keep their players hooked. One of these renowned developers is Pragmatic Play, whose newest slot game – Vegas Magic – will dazzle even the fussiest of players with its glitzy yet stylish fun.

The brand new title plays out across a 3×5 reel grid, which will no doubt appeal to those who miss the classic three-reeled slots of old. A selection of classic magic show symbols adorns the reels, encompassing doves, top hats, tigers, a magician, and his beautiful assistant.

It goes without saying that the standard, flashy Vegas-style symbols appear on the reels too, providing smaller wins and a touch of gambling themed fun to the mix. In this case, they include spades, clubs, diamonds and hearts, studded with bright fringes of lights in true Sin City Style.

The wild symbol in Vegas Magic here takes the form of the musician himself; a handsomely disheveled character that will remind many magic enthusiasts of Criss Angel. There is also a mystical scatter symbol that can trigger a tumbling symbols feature.

This innovative bonus feature boasts a form of re-spin that starts automatically whenever a winning line or scatter combo lands, activating tumbling spins that increase in value with every simultaneous spin. The feature and the consecutive re-spins will only end once a player lands a spin in which no wins are formed, giving you technically endless winning potential!

Play Now on Desktop and Mobile

Commenting on the thrilling new release, Pragmatic Play’s Chief Commercial Officer Melissa Summerfield noted that her company is delighted to reveal its latest online slot. According to the CCO, the game’s imaginative presentation and creative ways to win have made it one of Pragmatic’s most exciting releases yet – and the company is sure that its players will agree.

Summerfield also added that Vegas Magic boasts plenty of lucrative features to engage punters during extended play sessions. Combined with her company’s thrilling win methods, she said, the new slot is yet another solid addition to the developer’s extensive portfolio of online and mobile-optimized casino games.

Pragmatic’s gaming library currently contains more than 100 player-approved HTML5 slots, including smash hits like Wolf Gold and Da Vinci’s Treasure. All of these titles have gone live recently with an increasing list of top-tier iGaming brands, including those owned by industry giants like GVC Holdings and the Rank Group.