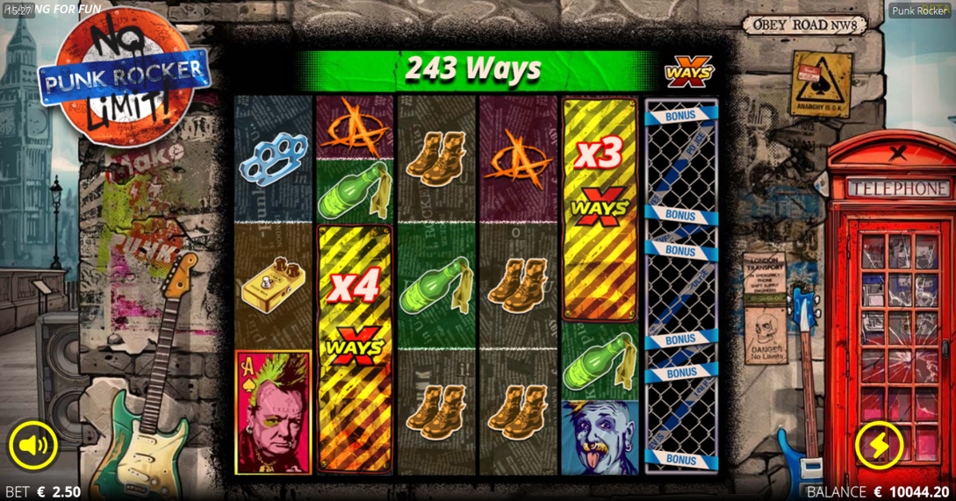 The new year is officially fully under way and this is perfectly clear from the influx of brand-new slots in the casino games industry. Malta-based leading casino software developer Nolimit City Limited has just released a new slot of their own and judging by the initial information revealed about the creative leading developer, Punk Rocker xWays is going to be one of the company’s most played to date.

The 243-ways-to-win format is used in the new slot, and the addition of an extra reel; making six in total; is a fully loaded big-win promise indeed. Punk Rocker xWays follows hot on the heels of predecessor Poison Eve. Nolimit City made use of an official press release in order to break the fantastic news about yet another new winning concept having been released into the ether.

The Punk Rocker xWays theme revolves around London’s 1970s Punk Rock movement. The idea back then was to smash and break and pierce whatever was available at any given time. Guitars, ears, tongues – nothing was completely off-limits during the Punk Rock movement. A little bit like Nolimit City then.

The idea, according to Nolimit City, was to release a new slot that merges ingenuity with pure adrenaline and unparalleled character. Other words used by Blueprint by way of description includes “heart-racing” and even “bonkers”, which really does sound like a great deal of fun.

Promising too is the inclusion of the developer’s registered xWays mechanic. The workings of the mechanic propose to provide players with more wins than what was ever before possible and according to Nolimit City’s Per Lindheimer, way-line altering combinations and upward growing Molotov wilds.

Lindheimer furthermore elaborated some regarding Nolimit’s idea for the new release and said that the company’s hope is that Nolimit will get noticed for its innovative approach to game design. The game is loud and up-tempo continued Lindheimer, and nothing short of a rowdy graphical approach.

And when translated to the mind of the typical player, what all of this comes down to is that this is a game we’re extremely eager to give a good go. Nolimit has repeatedly shown itself deserving of recognition and accolades even, for its specific approach when talking innovation in gaming. We’re bargaining on any more premium releases by one of the industry’s leading creative gaming powers. Punk Rocker xWays is gaming design at its very best for sure, and players can join in the fun on desktop or mobile.

Sizzling slots are waiting for YOU online. Play to WIN today!