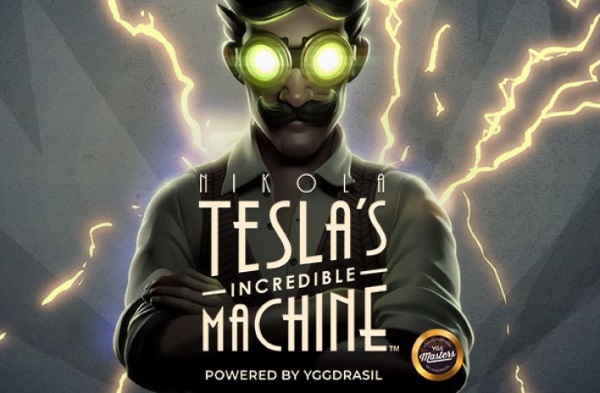 Yggdrasil has just released Rabcat’s Nikola Tesla’s Incredible Machine under the banner of its YGS Masters program initiative. The slot is only the second game to be released under the YGS umbrella and it’s expected to be the makings of some pretty electrifying wins. The famous scientist Nikola Tesla is the star of the show, as suggested by the slot’s unconventional title and the game without a doubt has at its core the intention of paying tribute to the legend that was Tesla.

To this end, the game’s setting is Tesla’s electrifying science laboratory. The game’s theme is one that has not yet been explored to its full potential in the world of online slots, being the world of steampunk. High-voltage wins are made possible by the various mechanics and players will without a doubt before too much time has passed latch on to the latest highly entertaining Yggdrasil release.

The Science Of Free Spins

Special features dominate the new game. The Energy Burst feature is up first and really is a celebration of everything that special story-telling slot features have come to represent. Energy Burst is launched whenever any 3-symbol match combination is landed on the reels simultaneously with an extra-spins scatter symbol on Reel No. 3 of the slot.

The exploding wilds feature makes for much excitement. Whenever the Energy Burst feature has been activated, two to three standard symbols will be randomly selected by the slot itself and subsequently transformed in order to be magically turned into exploding wild symbols. The wilds remain stationed in place on the reels for the duration of the free spins round. The wild symbol is none other than the brilliant scientist himself.

Its not hard to tell why Rabcat made the YGS Masters cut, especially not when considering the latest release to have come from the corner of the unconventional developer. Judging by what we’ve now seen in the bringing of the world of Tesla to life, we can expect to see many more Rabcat creations going forward.

A HUGE jackpot could be coming your way! Play online slots at TOP casinos TODAY.