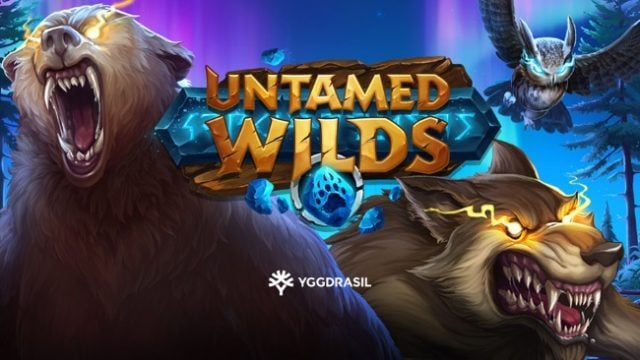 Yggdrasil Gaming is back with a brand new slot. Untamed Wilds is exactly as the name suggests and the game offers to players the chance to get up off their laurels and go on a superb outdoor adventure. The game is a celebration of seasons and of the ever-changing nature of the wild and there’s more than enough mixing it up in the game itself so as to ensure that there’s no risk of becoming bored.

Untamed Wilds immediately creates the notion that the theme isn’t just another typical slot story with wilds and free spins and multipliers. These features and more certainly do play their part in the slot but the look and feel is on an altogether different plane when it comes to the experience of the forest and the animals. Even the Northern Lights make a stellar appearance in Yggdrasil’s new Untamed Wilds slot.

Read More… Blueprint Makes For the Return Of King Kong

The Power Of Wolf, Bear & Moose

Untamed Wilds includes three modes of play. They are the Wolf mode, the Bear mode and the Moose mode. The modes change throughout the course of the game and one mode transforms automatically into the next. The modes rotate at a rate of 10 initiated spins to a season and each mode brings along with it a season’s worth of change on the game’s beautifully crafted reels.

Best of all is that each mode brings along with it its own special wild symbol. The Bear wild, for example, will expand into the pattern of a cross whenever it happens to form part of a win. Bear mode is set against the backdrop of a stunning sunset and a lush green forest, and it’s not hard to imagine being transported into the world of green and golden sunlight in the blink of an eye.

The Wolf and Moose modes are equally impressive. The Wolf wild is the special star in Wolf mode and the background is a winter wonderland, complete with snow-covered mountaintops. But the Wolf wild is a cunning player and is able to duplicate itself and appear at random in various positions on the reels, making even more regular wins possible.

The Moose wild is for “M” and everybody knows that in slots-lingo, “M” is for “Multiplier”. And so the Moose is the master of the multiplier. The scene is now set against the backdrop of a misty and mysterious forest and one can almost feel the blanket of fog on one’s skin as it passes gracefully through the trees.

Untamed Wilds is about so much more than just another slot, and getting lost in its light and magic and wild wonder is an experience like no other.