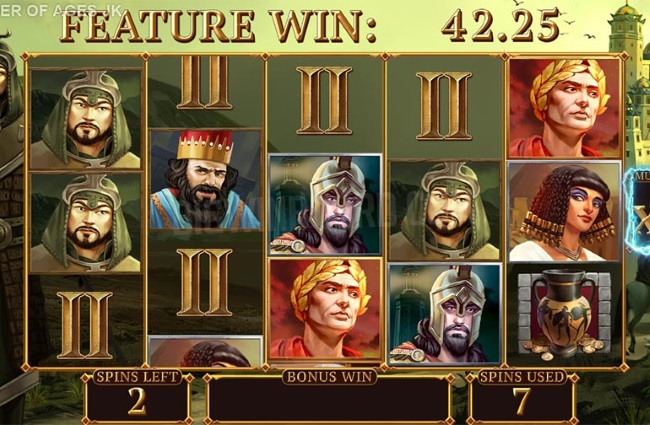 There’s seemingly simply no slamming on the breaks in Blueprint Gaming’s vocabulary. As the rest of the world enters into a Coronavirus-induced stasis of sorts, developers are releasing new content as if life on earth depended on it. Not that anyone can be heard complaining about the slew of top-quality slots released in recent times by the award-winning UK developer. And whilst on the topic of award-winning slots, it’s a done deal that the developer’s latest game will be heading in that direction too. Wonder of Ages is quite simply put, one of the most storied games that we have ever had the privilege to feast our eyes on.

This is story of ancient civilisations, powerful rulers who throughout history shone brightly in the night sky, acting as pilots to all those who followed. And it’s safe to say that few developers would have been able to bring yet another fresh new angle to the Ancient Egypt theme quite in the same way as what Blueprint Gaming has done.

The 5x3 grid and 20 paylines are set against the backdrop of a magical Egypt, with the mystery of the pyramids dominating the theme right from the launch. And theme aside; perhaps best of all; the slot is interlinked with the developer’s proprietary Jackpot King Deluxe progressive jackpot network. What this means is that this is no ordinary slot but instead offers to players the opportunity to win some pretty fantastic jackpots off of just about any size of bet.

The symbols are each based on some element of an ancient civilization, with the lower-paying ones being fashioned after the style of Roman numerals. The themed higher-paying symbols are each feature a different leader of the ancient worlds, transporting the player back in time to a world of mystery and power.

The slot supports all manners of systems, which means that players in possession of both iOS and Android-driven devices will be able to play the game. Blueprint-supported jurisdictions are all on board for the roll-out and soon, players in the UK, Isle of Man, Alderney, Gibraltar and Malta will all be able to get their ancient civilizations fix thanks to the Wonder of Ages.

Wonder of Ages will support 15 different world languages and is a medium – high volatility game. A variety of bets are supported and so players across the board are invited to join in on the other-worldly adventure of the year.