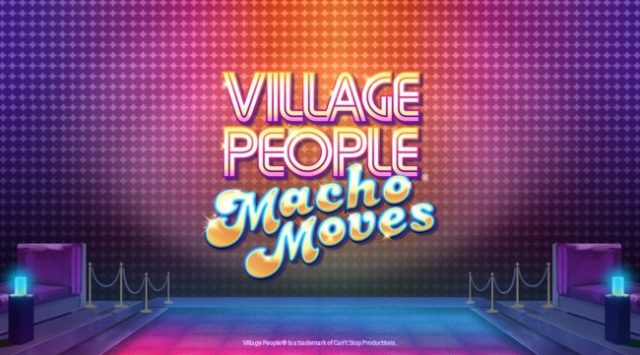 When talking the 70’s disco music movement, one of the first bands that come to many people’s minds is The Village People. This was the kind of music that instigated crowd participation, whether it was forming the letters of the big-hit YMCA with one’s arms or even marching in mock-military fashion to the beat of In the Navy, a lot of good clean disco fun was always at the order of the day. And so the news that Microgaming, in partnership with independent software studio Fortune Factory Studios, had been working on a new Village People: Macho Moves slot was received with much celebration.

Village People: Macho Moves is, true to Microgaming’s style, not out of anybody’s league or reach. The betting options are affordable and the winnings readily flow. High rollers need not despair, as the betting increments go all the way up to $25 for a single spin. The slot features 3 rows and an unusual 6 reels. The reason for this is that there’s a row for each member of the band.

Village People: Macho Moves contains a variety of VIP symbols and in-game tokens. Each member of the band is in charge of his own row on the game’s grid. Whenever tokens fall on any given row, the singer in charge of that particular row will have his special meter light up. Five tokens are all that’s required to fill any of the band members’ meters all the way to the top.

It’s of course at this point that any one of the slot’s 6 special bonus features are activated. This is because each of the band members presents players with their own special features, depending of course which band member had been responsible for activating the bonus feature.

The special bonus features range from free spins to wilds to enormous bet multipliers. The randomly locked-into-place wild symbol is going to be a big hit among players, of that we’re quite sure. The Village People: Macho Moves slot is bound to enjoy every bit of support and attention as what did all of the developers’ other independent studio-designed games.

We’re very much looking forward to seeing what will be released by Microgaming next. The independent studio design model certainly appears to be working for them.