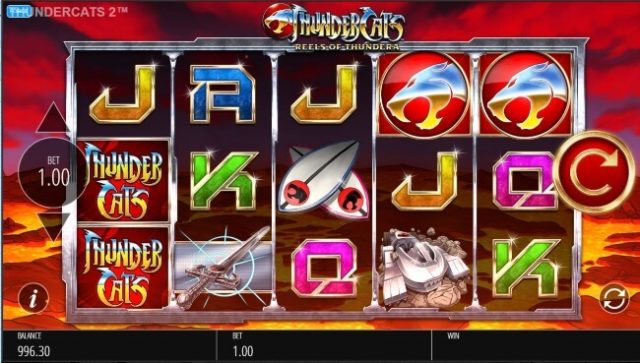 Players far and wide are preparing themselves for repeated attacks of 80s-tinged nostalgia, following the announcement of ThunderCats Reels of Thundera. Blueprint Gaming’s second online slot based on the cartoon series was unveiled in June.

The 5-reel slot includes several different special features and modifiers. Among the previous licensed releases created in partnership with Warner Bros. Consumer Products are slots based on the Goonies, Mars Attacks, and Top Cat.

The provider’s marketing and relationships director, Jo Purvis, said the first title to feature Lion-O and the rest of the ThunderCats was popular with players. They added that the sequel should be even more so.

Homage To the Show

Purvis explained that audio and video was used in ThunderCats Reels of Thundera to replicate the feel of the TV series. Among the characters that make an appearance are Lion-O, Tygra, Cheetara, Panthro, WilyKit, WilyKat, and archnemesis, Mumm-Ra.

Beyond this, the new online slot has various special features that are expected to be well received by players. There are seven different modifiers that can be awarded by the Eye of Thundera, which can trigger during any spin. There also are six different bonus rounds, such as the Ancient Spirit of Evil round. Multiple bonus rounds also were a key element of the first slot based on the cartoon. It included a round for each of the characters.

A Closer Look At ThunderCats?

First produced by Rankin/Bass Animated Entertainment and Leisure Concepts, ThunderCats made its screen debut in 1985. The animated series was based on characters created by Ted Tobin Wolf, and told the story of cat-like aliens who fled their home planet, Thundera, which was on the brink of destruction.

An attack perpetrated by the Mutants of Plun-Darr forced the fleeing Thundereans to alter the course of their journey, and travel to Third Earth instead. There, they and the pursuing mutants encountered friendly inhabitants and the power-mad embalmed sorcerer, Mumm-Ra. The sorcerer recruited the mutants, and declared war on the Thundereans.

ThunderCats first aired from 23 January 1985 to 29 September 1989, and enjoyed considerable popularity. It inspired spin-off merchandise such as action figures and playsets, computer games, a board game, a lunch box, a racing set, a folding tray table, and clothing and accessories.

The franchise has enjoyed continued popularity. In 2009, Warner Bros. licensed collectible statues, and in 2010, Bandai announced a new toy line. A new animated show was broadcast in 2011, but its darker atmosphere did not appeal to the intended audience of six to 12-year-olds. The new series was cancelled after its first and only season, but older fans still love the ThunderCats, and the response to Blueprint’s themed slots has been nothing short of exceptional.

Get into a slots game ONLINE! Spun the reels to see if YOU can win BIG.