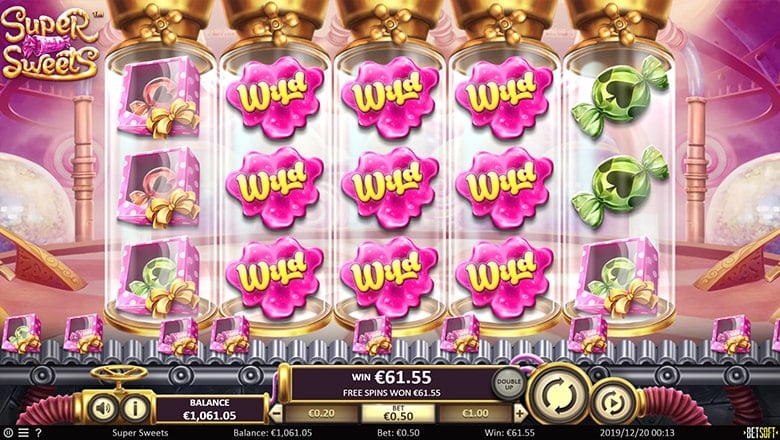 Perhaps the most exciting thing about start of a new year is that its bound to bring along with it a bombardment of thrilling new games from the world’s leading developers as each is more eager than the next to make anew a good impression. This year is shaping up to be no exception and development giant Betsoft Gaming is ready to take 2020 by the horns. The gaming specialist has announced that it will be launching its very first slot for the year on January 23. Better still, Betsoft has released some exciting pre-release information about its coming-soon Super Sweets slot.

There’s a lot to look forward to at the beginning of each new year with a clean slate just waiting to be filled with new games and entertainment and exciting new possibilities. As far as looking forward to top new titles goes, Super Sweets by Betsoft certainly promises to rank high up on the quality list.

Super Sweets is a fresh new approach in terms of Betsoft Gaming’s typical style of development in that the game offers 10 paylines only. Seasoned players will be the first ones to have their interest piqued by this news and its general knowledge among the connoisseurs that more paylines doesn’t necessarily mean bigger wins, and vice versa. And so its going to be exciting to see what Betsoft has in mind with the keeping-it-simpler approach. The leading developer is one known for always having a special trick or two up its sleeve and we won’t be even a bit surprised if this is the case with the new Super Sweets slot.

Aside from the company having veered from the beaten path as far as paylines are concerned, the game will feature some of the classic old favourites too. For starters, Super Sweets offers to players a higher-than-average RTP. At 95.03% it won’t be tough going to hit the win time and time again.

Super Sweets furthermore features a special bonus. The bonus will offer free spins every time three or more Golden Ticket scatter symbols are landed on the reels. Perhaps most exciting of all is the presence of sticky wilds all throughout the free spins. All wild symbols appearing on the reels throughout the course of the bonus game will automatically be turned sticky and will also award 1 re-spin. One can only imagine the possibilities.

Be sure not to miss out on Betsoft Gaming’s new Super Sweets slot once it goes live on January the 23rd.

Get the reels SPINNING to get WINNING! Play top online SLOTS today.