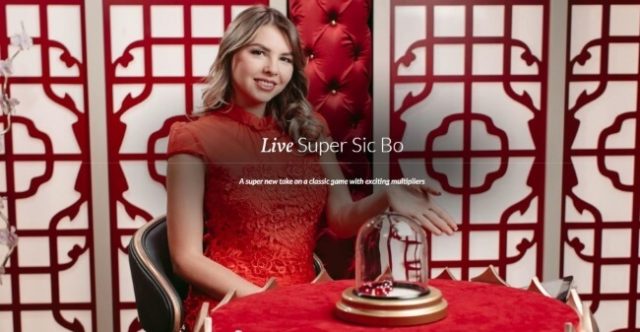 Fans of dice-style games (aren’t we all?) take heed! There’s a new live casino version of Sic Bo that is coming to town courtesy of Evolution Gaming. Live Super Sic Bo is officially live and can be accessed from all major operating systems and devices, no matter how big or how small.  Random multipliers and smooth 1,000 x bet multipliers all work together to sweeten the new Sic Bo deal, without giving up too much of the traditional flair of the game.

Three dice are rolled and players are called on to predict the outcome. Bets can be placed on a variety of outcomes, and these are all described and explained in detail by Evolution on the game’s betting table. The fact that the action doesn’t deviate too much from traditional Sic Bo is a nice touch indeed. This ensures that the game will be enjoyed by old players and new.

The main difference lies with the game’s special features, which includes an entire range of special multipliers that are applied completely at random. Best of all is that the multipliers are applied and made known even before the dice are thrown. By doing it this way, players are afforded the leisure of deciding for themselves whether or not to up the ante based on the promise of the multiplier values on offer. This is where the excitement of the gamble enters the playing field and betting big certainly means the opportunity to win big too.

Chief Product Officer Todd Haushalter describes Live Super Sic Bo as the next big Sic Bo frontier, and has said that Sic Bo may have changed and evolved considerably over the course of the last century, but that players are sure to remain entertained by the classic dice game thanks to special effects having been added into the mix.

The 1,000x bet multiplier for one, is bound to strike a chord with lovers of Sic Bo.

Evolution has been stuck on a rapid expansion spree, and the corporation has opened no fewer than 3 new live casino studios. It was awarded for its stellar efforts by the Global Gaming Awards. The live casino specialists recently won the highly coveted Online Casino Supplier of the Year award.

Ready to bet on the roll of the dice? Play Sic Bo and MORE dice games online.