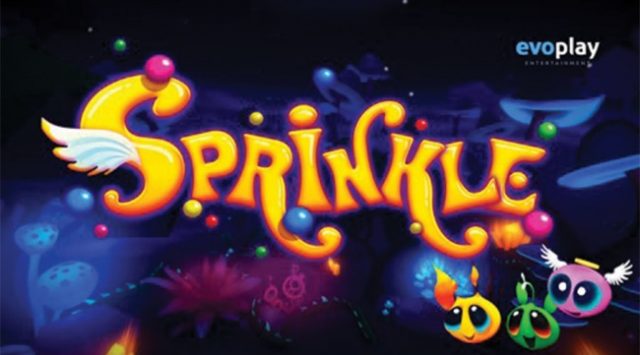 Developers are constantly trying to decipher a different type of code; that of coming up with fresh new ideas that will keep players entertained. Evoplay Entertainment really is onto something with their brand new Sprinkle slot as the game makes use of everything from 3D technology to Virtual Reality concepts. The slot is the latest game to be released by Evoplay and follows hot on the heels of the September Reign of Dragons release.

Evoplay describes the new game as their second only 3D slot, complemented by high-tech VR technology and cutting edge ideas. The developer introduced its latest creation to the gaming world by providing details about the slot to European Gaming Media and Events. The information was duly published in a recent official press release that also acted as commentary of sorts regarding the newly released “fantasy world”.

It Does Mobile And VR

Evoplay has confirmed its Sprinkle slot to be 100% mobile compatible and featuring a 96% RTP ratio. It commented on the fact that various special bonus win features have been incorporated including free spins, wilds, multipliers and more.

The developer appears to be especially proud of the basic mechanics of the new game and has said that the focus was all throughout the development process on making the game as appealing to especially mobile in-browser players as possible. The focus appears to be on attracting a new generation of players; those who are tech-savvy and want much more than one dimensional play or a game preferably fired up on Autoplay. Millennials, especially, want to be able to engage closely with any given activity undertaken, and playing games is no exception.

Something Special In The Making

We will without a doubt be reading positive player reviews about Evoplay’s Sprinkle, especially if the initial information provided by way of the introductory press release is anything to go by. Evoplay has carved out for itself a niche market within a global super-sphere and the release of Sprinkle is just another example of why this is true.

In addition to the basic slot-style gameplay and the 3D elements and style, players into alternative realities may want to invest in a pair of VR goggles in order to experience the full spectrum of what the new game has to offer. This is nothing other than slot on steroids and it makes us truly excited about what the future of gaming holds.

Experience the EXCITEMENT of slots online! Spin and WIN 24/7.