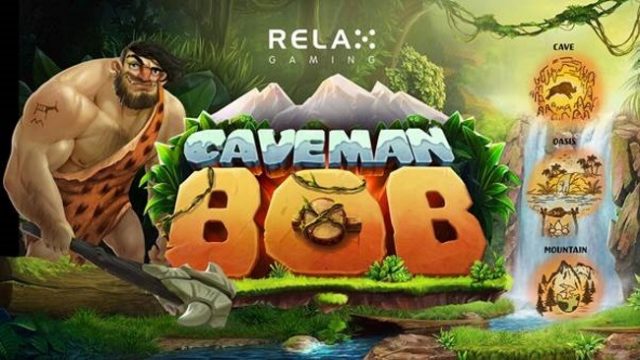 If the title “Caveman Bob” sounds like a Flintstone-style blast from the past, then that’s because its exactly what it is. It’s the title of a brand new slot developed and released by Relax Gaming; a studio famous for its unconventional themes and off-beat entertainment.

Caveman Bob draws heavily on a typical mode of play found in traditional video games, being the systematic unlocking of new worlds and environments as a means of being rewarded for having made progress and achieved certain pre-revealed goals. The opening scene is set in a superbly developed ancient world. The colours are wonderfully blended to appease the visual addict in all of us, and its evident right from the start that this isn’t going to be just another online video slot.

Three worlds may be travelled to as the game progresses: Oasis, Cave and Mountains. Each stage, or environment, offers different special slot features. The volatility varies too as the player journeys through the various worlds.

Re-spins, free spins, wilds and even a special Wheel of Fortune feature all combine to create the possibility of making the ultimate goal of the game actually happen: a 500x bet multiplier. It’s quite evident just by looking at the new release that no effort has been spared in the quest to create something truly unique and never been done before in the world of online slots.

Caveman Bob Has It All

This is a sentiment and statement that is echoed by Relax Gaming’s Chief Product Officer, Simon Hammon. Hammon spoke of our launching a new game was always a very exciting and even sometimes apprehensive affair. But, says Hammon, Caveman Bob has something very special going for it; a type of elusive X-factor.

The initial feedback received from the developer’s contacts, explained Hammon, leads Relax to believe that this particular slot is going to become one of the studio’s most successful products to date.

Relax Gaming has to date developed more than 570 high-quality slots and doesn’t plan to quit doing what it’s doing anytime soon. The developer is regarded to be what is referred to as a new breed of developers; highly innovative minds able to pinpoint exactly what modern-day players want in a slot.

Ready to spin the reels? Play slots online and HIT THE JACKPOT!