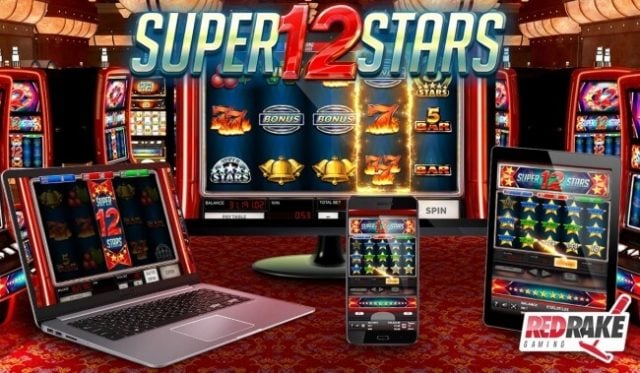 Casino games developer Red Rake Gaming has obviously discovered the star attraction that is a themed slots series; a model that has worked magic for developers like Quickspin and Microgaming. People just love a good story, and a slots series is the perfect way for slots to have its day with creating a story instead of just offering a once-off elaboration of a theme. Red Rake’s answer to the story conundrum? Its Super series; and best of all; it’s just added yet another episode into the magical mix: Super 12 Stars.

Players took to Super 5 Stars, Super 7 Stars and Super 10 stars like ducks to water, and so it did obviously make perfect sense to up the ante all the way to a super number 12 in the series. The 5×3 slot incorporates a stellar 30 paylines set-up and is a coming together of all of the best features of the initial three releases in the batch.

The highlight of the new release is the Lucky Stars special feature. It’s a winning extravaganza like no other, and it combines 3 different jackpots with an insane number of instant-win opportunities. The Super 12 symbol acts as a type of bonus symbol and whenever it appears on the reels in a combination of 3, it will launch a free spins round. What’s more, each time a single star is landed on the reels subsequently to the initial activation-three, players will again be re-routed to the free spins frenzy.

Whenever the game’s special feature is in play, 3 different jackpots will be up for grabs too. These consist of a Minor Jackpot, a Major Jackpot and a Grand jackpot.

Best Of All Three

But to back-pedal to the best of the previous 3 releases having been incorporated into the magic that is Super 12 Stars; the Super 10 symbol makes a guest appearance, as does the Super 7 Stars and the Super 5 Stars special symbols. These all add to the excitement in their own special way. The Super 10 symbol, for example, activates the Super 10 Mini-Slot. The feature is jam-packed with free spins and multipliers, offering some amazing opportunities for instant wins.

The Super 5 Stars symbol triggers a very special feature indeed. During the Roulette Bonus, players may very well see their bets multiplied by a 200x multiplier. Now that’s an opportunity for a serious win!

The Super 7 Stars symbol appears at random during the base game, and once it does, it will remain fixed on the reels, activating a re-spin of all of the remaining reels.