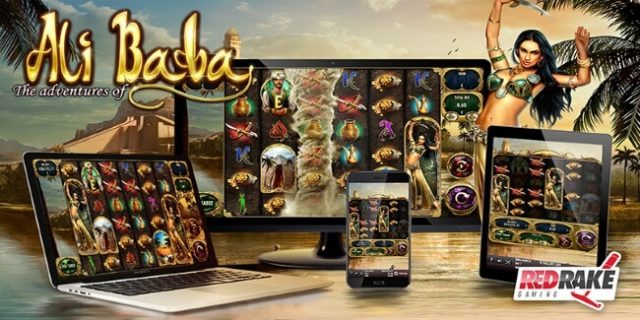 The revival of classic stories and fables from a long time ago always brings back great memories. This is exactly what Red Rake Gaming has managed to do with the classic tale of Ali Baba and the Forty Thieves. The developer has just released its new The Adventures of Ali Baba slot, and judging by the entertainment value locked up in all of Red Rake’s other stunning games, this one will be a smash hit worth giving a go too.

Much like the fable, the 6×6 grid and 50 payline slot features all of the classic Ali Baba surroundings, including the well-known cave of hidden treasures, the band of thieves threatening the dowry and just the general imaginative mystery of it all. The experience is made all the more special because this time the adventure takes on the form of teaming up with beautiful slave girl Morgiana to save as many lives as possible.

The slot itself is a true treasure and there’s an opportunity to win around every conceivable corner. A tornado sweeps cross the reels at random intervals, turning the left side of the grid completely wild. The brave Morgiana is the standard wild symbol. Morgiana will substitute for all symbols save for the slot’s special bonus symbol, which is represented by the SESAME symbol (who will ever forget “Open SESAME!”).

Three SESAME symbols anywhere on the game’s reels acts in the same way as did the famous phrase and once landed, the trilogy or more of special bonus symbols will unlock the free spins feature. Best of all is that the feature can be triggered and re-triggered an infinite number of times. There simply is no stopping the wins once they start to fall!

Red Rake has been busy forming new partnerships with suppliers and platforms all over the globe in an effort to expand the reach of its business and games. The developer recently sealed a new content deal with the France-based gambling group Betclic.

The main advantage about the deal with Betclic is the fact that this will help to further establish Red Rake Gaming as a licensed provider in Portugal, where first-mentioned has already cemented itself as a major and respected industry role-player.

With another new slot release and an exciting new partnership, this year is certainly shaping up to be a good one for Red Rake!