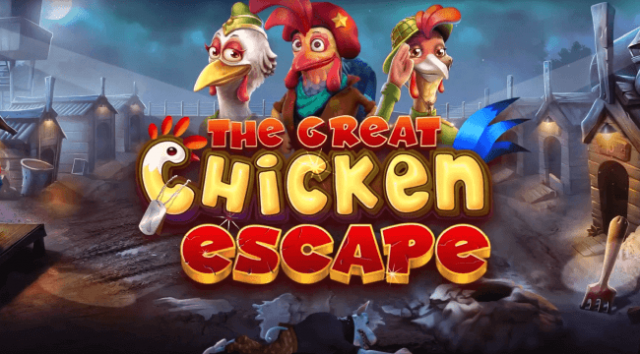 Masters of casino gaming entertainment Pragmatic Play have been at it again and this time round they’ve resorted to life in a chicken coop for the theme for their latest slot. The Great Chicken Escape follows the adventures of a band of poultry greats ready to lead their “people” to freedom and out of the confines of the coop.

The game is jam-packed with special features sporting quirky feather-style descriptions. It hatches its premise around the player escaping the chicken coop, and the special features are instrumental in the great escape mission. Bonus rounds include Poultry in Motion, Get Clucky to the Other Side, and Secret Tunnel. It’s all about making a daring escape and The Great Chicken Escape is probable Pragmatic Play’s most daring slot to date too.

The Great Chicken Escape features a 3 x 5 grid and a total of no fewer than 7 bonus rounds. Wilds feature everywhere and include Guard Dog Wilds and Chicken Run Wilds. The prominence of the wild symbols really crank up the excitement by more than just a couple of notches. The entire game is hinged on the idea of a bonus win around every possible corner.

The chickens give it their all to positively work the escape and the player ends up centre-stage in the poultry AWOL adventure. There are dangers to contend with on the way but thanks to the average volatility of the slot, these don’t make too much amok in the greater swing of things.

The Great Chicken Escape is an adventure-style slot and every bit as interactive and engaging as most of the other titles to have come from the ranks of the developer in recent times. Other entertaining titles to have been released recently by Pragmatic Play include the popular Sweet Bonanza, the award-winning Wolf Gold, the red hot Hot Chilli and the entertaining Mustang Gold.

A Long Line Of Successes

Things have been buzzing on the development front and Pragmatic Play has been focusing almost exclusively on mobile casino games. The company currently has more than 100 stunning mobile games in its impressive portfolio, and there’s no end in sight to the massive expansion.

Pragmatic Play’s games are available in most regulated markets and language support is offered in a very impressive total of 26 world languages. All regulated market currencies are supported too. Pragmatic is on a stellar mission to bring top quality games to as many people as possible the world over.

On the hunt for a HUGE jackpot? Play top quality slots ONLINE!