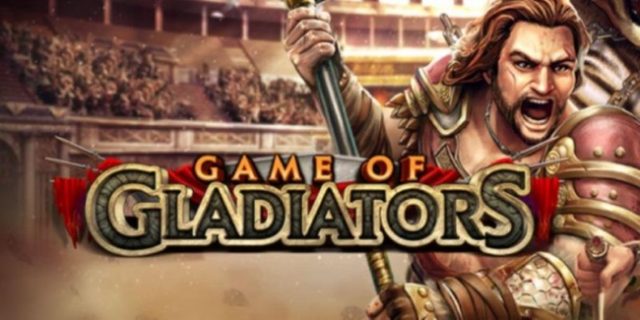 Drawing on Roman culture, and even on the heroic Gladiators themselves, is not a new idea in the world of online slots. Playtech has even released the simply titled Gladiator, based on the blockbuster movie of the same name.

However, Play ‘n GO has recreated the world of these elite fighters especially well, and players can look forward to being immersed in the game as soon as they start to spin the reels. The beautiful artwork on the reels includes characters that span all 3 rows, and the background soundtrack is suitably epic.

Play ‘n GO’s technology is very adaptable, and will work perfectly on whatever desktop, smartphone or tablet you want to use. The brand is known for the responsive functionality of all its titles, and Game of Gladiators certainly lives up to the developer’s reputation.

The extra features that have been added to Game of Gladiators take it from being great entertainment to being an unmissable slots release. As well as the usual Wild and Scatter Symbols, several Primus Attack rounds can be triggered at random.

The Primus Attack Bonus Rounds include Fame, Spear Attack, Sword Attack, Net Attack and Enraged. During Fame, one Gladiator is chosen to be “Famous” and the reels are spun. Each of the Famous fighter’s visages will be added up, and you’ll be paid out accordingly.

Spear Attack turns some symbols Wild by hitting them with spears, while Sword Attack duplicates Reel 1’s images on Reels 2 and 3 for more potential wins. In Net Attack all Gladiators of the same kind are held in place for a single respin, while Enraged entails making the Tiger Wild Symbol angry and adding 2 full Tiger Wild reels to the screen.

The main special feature in this Play ‘n GO slot is more proof of their innovation and commitment to detailed, engaging games. Enter the Arena is triggered when Scatter Symbols land on Reels 1, 3 and 5. At this point, you’ll need to choose Spartacus or Amazonia to be your champion.

Whoever you select will be the Scatter for the remainder of the round, as a massive “battle” takes over the reels. Each time a Scatter lands another round of the battle begins, and after some serious action, one group emerges victorious – giving the game another chance to pay players out.

Get the reels rolling and the wins coming in! Hit the JACKPOT with online slots.