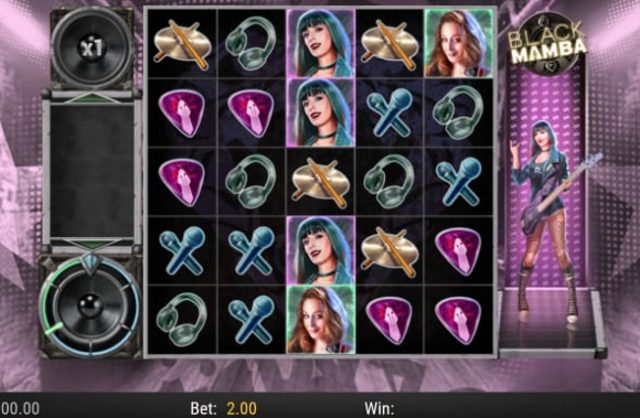 Play’n GO has just released its latest online slot and its really good news for music lovers, especially those who count themselves as fans of popular Italian rock band Black Mamba. Music first entered into the equation for the leading slots developer back in 2018 when it released House of Doom. What with doom metal being a rather niche music genre market, it was very much a time of trial and error. Lucky for Play’n GO, it all turned out a hoot on the popularity front and the development studio then topped it off with a 2019 release of a game based on the music of heavy metal band Demon.

Black Mamba is the latest band to receive the Play’n GO treatment and its very obvious that a great deal of effort had gone into creating a themed game that is both authentic to the style and genre of the band and its music, as well as appealing to the typical modern-day online slots player.

Time To Meet The Band

Fans of Black Mamba will immediately recognise the band members on the slot’s reels. Cecilia, Fred and Alexandria are the absolute stars of the show, with lead-singer Martina rocking it up as the game’s bonus wild symbol.

Joining the members of the iconic band on reels are various rock-themed symbols. These represent the lower-paying symbols and include plectrums, drumsticks, microphones and headphones. Its all music all the time, which is what makes the slot to be really effective on the overall theme and rock band storyline.

Cascading Symbols For The Win

Black Mamba features a 5×5 grid and instead of following a traditional style, incorporates cascading symbols. This means that symbols constantly fall and then fall away, making space of more symbols in the gaps remaining on the reels. This particular style has gained a great deal of momentum over the course of past months.

Symbols are matched vertically as well as horizontally. The cascading style is popular in that it allows players to not only take advantage of what is currently on the screen on a game’s interface, but to build winning sequences thanks to the symbols constantly cascading and replacing one another. In addition to this being a super concept in favour of big wins, it also enhances the general flow of the game.

Black Mamba also features a special free spins bonus round consisting of 8 free spins. Free spins are awarded in the event that the entire grid is cleared of all symbols. Talk about a rocking and rewarding slot!

Strike it RICH with online slots! See if you can win big TODAY.