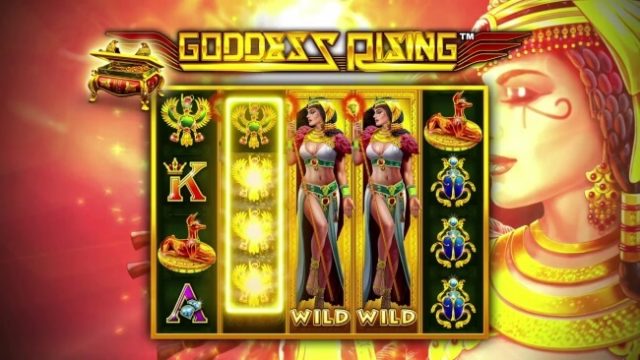 We’ve said it so many times before, and now we are going to say it again: there’s nothing quite like an Ancient Egypt-themed slot. There’s a certain magic associated with Ancient Egyptian civilizations that cannot be denied, and for slot players, it’s the ultimate indulgence. Thanks to the creative team at iGaming development giant Novomatic, players have just been treated to yet another slot game based on the world’s all-time favourite theme.

Novomatic’s new Goddess Rising slot is a true celebration of Egyptian culture. The game features a 5×4 grid and 40 paylines. The game’s RTP is impressive and there isn’t a shortage of ways to win. True to Novomatic’s meticulous style, the developer has ensured that everyone’s invited to the party. Goddess Rising is fully compatible with all desktop and smart mobile devices.

Isis is the star of Goddess Rising. In Ancient Egyptian belief, Isis was born into the last generation of the Ennead. She came from the loins of the goddess of the sky, and her father was none other than the earth god named Geb. Isis is culturally very significant to the people of Egypt, and she is portrayed as a being of exceptional beauty in Goddess Rising.

Isis is joined on the reels by an entire entourage of significant symbols, including the holy scarab, a crook and staff, a number of god-depicting golden statutes and of course, hieroglyphs. There is also the Sphinx symbol, and this doubles up as the jackpot symbol. 5 Sphinx symbols on a single payline is worth a whopping 160x multiplier of the current bet being played.

Isis herself appears in the form of an expanding wild symbol. She only makes an appearance on the middle 3 reels. In addition to being an expanding wild, Isis does her magic of substituting for all other standard symbols.

The slot also incorporates a golden scatter symbol, tasked with triggering the Goddess Rising’s free spins bonus feature. 12 free spins are awarded every time the feature is triggered, and what’s more, for the duration of the free spins, landing a wild symbol on the reels means even more free spins are added on to the total.