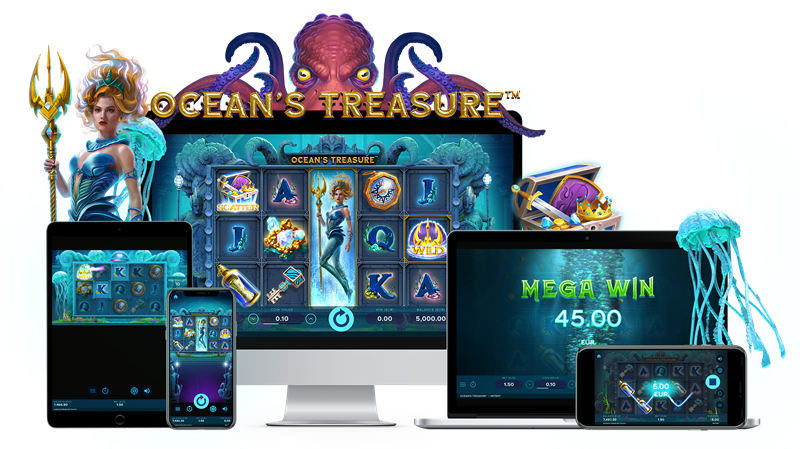 NetEnt is back with a brand new underwater maritime treasure hunt adventure. The leading developer has just lifted the covers from its latest creation and players had better brace themselves for the awakening of the great and ominous Kraken, protector of prizes and riches, as he guards all that glitters in Ocean’s Treasure land.

It’s quite obvious that this is a setting and theme inspired by the mysterious wonders of the lost city of Atlantis. Stacked Wilds and Free Spins prove a charm and turns the game into a true slots adventure and an engaging gaming experience at that. The 3x5 grid allows for maximum matched symbols win capacity and players will enjoy chasing the ultimate goal of knocking the devious Kraken form his pinnacle of pride and laying claim to the treasure.

Kraken is the protector of the slot’s free spins round. Players gain access to Kraken’s territory whenever three or more scatter symbols are landed simultaneously on the Ocean’s Treasure reels during any single spin. Entrance to a 5-free-spins bonus is granted and once these are in play, each additional wild symbol landed on the reels will award more extra free spins.

By keeping this up, players will venture further and further into the mysterious depths of the ocean and also move ever nearer to where the ultimate treasure is buried. The absolute highlight of the slot is that once the free spins are in motion, the game allows for up to a staggering total of 102 free games to be awarded! There’s hardly any other developer other than the superior market force that is NetEnt that would even dare venture into this type of win territory.

What with all of the above having been said, and with the variety of potential locked into the free spins game, it stands to reason that the volatility will be pretty high. And so, if high-volatility play is a player’s idea of fun (and it certainly is for many people!) then NetEnt’s Ocean’s Treasure would be nearly impossible to beat.

High-intensity play is what Ocean’s Treasure is really all about, says NetEnt Director of Games, Brian Upton. And the levels of engagement built into the new slot by one of the world’s most expert slots development teams are second to no other game out there. This is a variety of engagement that not only attracts new players, but also keeps seasoned players coming back for more.

Dive into the BEST slots online. Hit the JACKPOT spinning the reels!