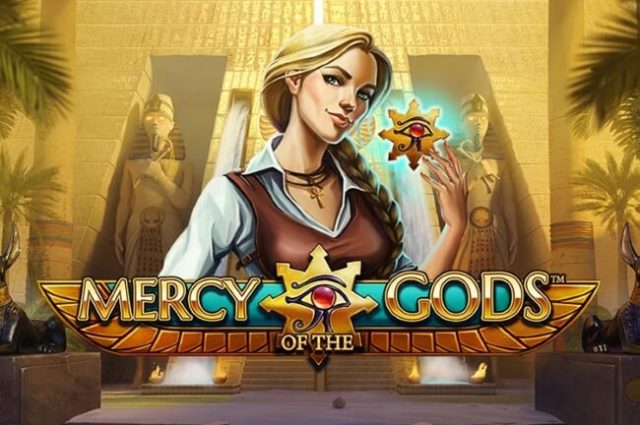 Ancient Egypt-themed slots. You either hate them because it’s absolutely everywhere you turn or you’re so stuck on the deity-based undercurrent that you’re hardly able to stick with any other theme for very long before returning to all of the magic that the ancient civilization has to offer. Either way, you may want to give NetEnt’s new Mercy of the Gods slot a go before completely dismissing the idea that anything new is able to come out of the mystical land of the pyramids.

Even before the new slot was released, the developer revealed quite a bit about what was to come. The game would include a 5×3 grid and feature 20 paylines. It was all NetEnt business-as-usual up until that point. So was the fact that the RTP was a confirmed not-too-shabby 96.64%, which isn’t bad as far as house/player win/lose ratios go.

There was also to be a free spins bonus round, revealed the NetEnt teaser, with 3 scatter symbols anywhere on the reels being the charm. It was at this point that NetEnt “upped the game” so to speak, because Mercy of the Gods would feature a very special expanding wild that would appear during the bonus round, expand to cover the row from front-end to back-end. And as if that wasn’t good enough, the expanding wild magic had the potential of making an appearance during the base game too. Landing a wild symbol onto an existing wild symbol on any given reel achieved the superb double-act.

The downside is that the game’s pre-release review; even before anyone had had the privilege of taking it for a test drive; reminded the reader of another well-known slot, namely Divine Fortune. NetEnt’s Director of Games Brian Upton later on acted as if it had all been on purpose, obviously after having discovered that the penny had dropped and the savvy had pounced. Upton tried to swing the pendulum by saying that the developer had hoped to duplicate the highly successful mechanisms of Divine Fortune; success being a relative idea in this instance.

All in all, the slot compares well with the initial pre-release information. And needless to say, fans of the ways of Isis and his merry band of godly sidekicks will in all likelihood not venture out of their respective gaming holes anytime soon.

And really, in the end, isn’t that what successful slots development is all about?

Is it YOUR lucky day? Play the best slots ONLINE and find out!