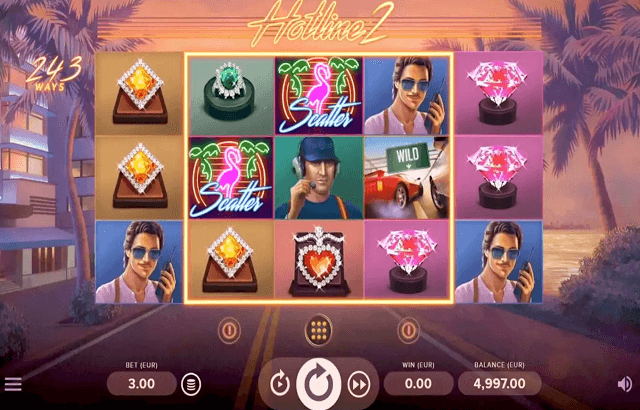 Hotline 2, just like its famous criminal street-racing predecessor, is based on the epic 1980s namesake American crime drama television series, and once again invites players to take to the streets of Miami in the interest of ensuring that justice be served. And as for all the old favourites, they’ve all been included in the sequel too, including Miami police detectives Ricardo “Rico” Tubbs, James “Sonny” Crocket, and Gina Calabrese.

Played on 5 reels and 3 rows, Hotline 2 offers to players an incredible 243 Ways to Win. Not to mention even an instant expansion of the reels all the way up to 1,944 win ways during the Free Spins feature.

The Classic And The New

Literally everything that made the original 2018 slot great has been re-introduced into the sequel – together with a couple of new additions in terms of look and feel and symbols, as well as a decent overhaul, of course.

Hotline 2 features once again the super-popular Hotline Bonus Bet. The feature allows players to increase the ante quite considerably by signing up for Expanding Wilds for even bigger and more amazing wins than before. And the all-new Free Spins bonus round is bound to be a smash-hit among online gaming enthusiasts also.

The retro soundtrack and 1980s Miami look and feel are bound to whisk slot’s players away to simpler times as they sign up for the important job of keeping their fellow Miami civilians safe.

Welcome To The Hotline Zone

The Free Spins round is activated by landing three or more of the pink flamingo scatters on reels numbers 2, 3, and 4 – an area also known as the Hotline Zone. Not only will a smattering of free game be awarded on the double, but players will also notice the appearance of super-expanded giant wild symbols whenever wilds happen to land in the Hotline Zone.

The three Hotline Zone reels have the ability to expand all the way up to a max-height of 6 rows tall. And each time a reel in the zone reaches its maximum height, 2 free spins are instantly awarded.

Hotline is a solid slots favourite among NetEnt players, said NetEnt CCO Andy Whitworth of the latest new sequel-release. As such, said Whitworth, it made perfect sense to release a sequel, and thereby expanding the popular franchise.

Get the HOTTEST wins online. Play the BEST slots NOW.