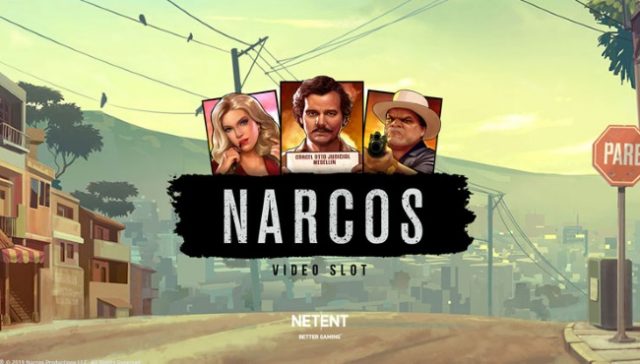 The narcotics agents responsible for having taken down cartel-boss Pablo Escobar are now not only the stars of a popular Netflix series, but also of their very own NetEnt-developed online slot.  NetEnt’s new Narcos slot also happens to be based on the Netflix production based on the same storyline of events, and was officially launched by the casino games software giant on May 23.

The online slot; much like its television series name-sake; is historically correct in that its setting is the streets of Medellin, Colombia, where Escobar had for many years ruled as the king of narcotics. Medellin forms the perfect backdrop to the game’s grid that consists of 5 rows and 3 reels. The total number of paylines tally 243, and this contributes to the playability of the slot in a big way as symbols can be matched any which way.

NetEnt Are Kings Of The Theme

NetEnt really went to town with the development of the theme. The storyline lends itself to some pretty awesome animations, such as the bullets sprayed onto the screen when high-value symbols are in view during one of the game’s special feature. The sprayed bullets form part of the special Drive-by feature; a feature based on a typical shoot-out style drive-by that often played itself out in the streets of Colombia when Escobar ran his citywide narcotics cartel.

In the event that the stray bullets hit the high-value symbols, those symbols will then be transformed into wild symbols; making for some pretty grand wins on the way. But the wild wins aren’t the end of it either. Once the high-value symbols have completed their wild transformation, another special feature kicks into action. The Walking Wilds feature is one of the most exciting of the game. Each time a wild symbol is transformed and slotted into place, any symbol not completing a winning combination during that particular spin of the reels, will during subsequent spins move a position to the left, which in effect creates a “walking” action. The Walking Wilds feature will remain in play until no more wilds are visible on the game’s reels.

No Narcos themed slot would be complete without the possibility of someone landing up in the slammer. NetEnt really did think of everything, as is evidenced by the Locked Up feature. The feature is activated by three or more Locked Up symbols landed anywhere on the reels. Once the Locked Up feature has been activated, all of the symbols will be made to look like they are incarcerated and behind bars.

The symbols being stuck in the slammer isn’t at all a bad thing, as once the Locked Up feature has been activated, random coin wins will start to fall in favour of the player.