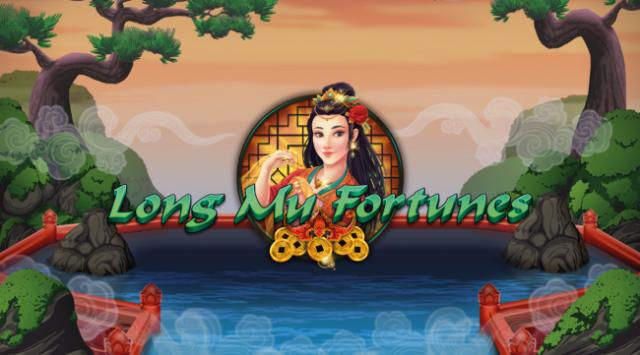 So enamoured are we with online casino software developers Microgaming, that despite the developer’s prolific development speeds, it nearly always feels like ages had lapsed between the release of new slots. Thanks to the likes of independent studio partner Fortune Factory Studios and others, we never have too wait too long for the next game to be published. And this time round, it just to happens to be called Long Mu Fortunes.

Anyone familiar with Eastern culture will have immediately realised that the basic theme has much to do with a century-old Chinese myth. Microgaming is well known for the unique ability of knowing exactly how to tap into the very essence of diverse and captivating cultures and judging by first appearances, this is a talent shared by Fortune Factory Studios.

Long Mu Fortunes presents the player with five reels and ten paylines. The ultimate attraction of this slot is however the stacked wilds. These are rather appropriately; especially when considering the cultural context at play; represented by wild dragon symbols.

The Red Dragon Wilds feature comes to life on the reels whenever wild dragons land in whichever positions on reels 2 and 4. This is where the wild action first starts to happen. A stacked lock is immediately activated and a re-spin awarded. The game is much more than randomly going about it trying to win and score; its been masterfully designed so as to speak of the wonders of hidden cultural secrets. And if winning happens to be a by-product of the magic of culture, then all the more reason to celebrate the new slot. Nudging multiplier stacks are the cherries on the cake, nudging 3x multipliers in to action every time a re-spin has been activated.

There’s also a Free Spin feature in Long Mu Fortunes. What would a slot be without free spins, after all? And those who know slots know that the true magic hidden behind the free spins veil isn’t so much about playing a number of spins for free, but rather the amped up bonuses generally up for grabs once a free spins feature has been activated.

Yet again, Microgaming doesn’t disappoint. Not only are 10 free spins up for grabs, but re-spins also happen more regularly during the Free Spin feature. And if this wasn’t exciting enough, all nudging multipliers will land at 3x for the duration of the Free Spin feature. The only thing left to do now is to head on over to any one of Microgaming’s awesome operators and start spinning the reels of Long Mu Fortunes on desktop or mobile!