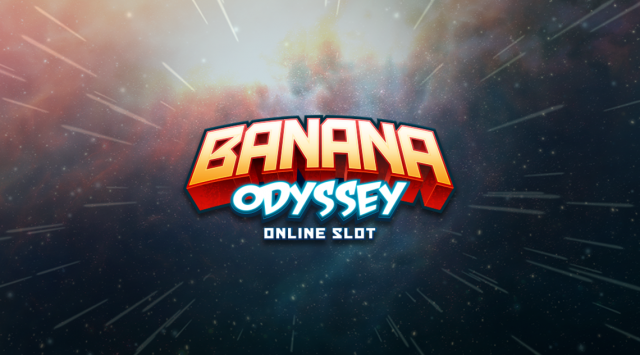 Microgaming has just released its new Banana Odyssey slot, developed exclusively for the casino games giant by independent studio partner Slingshot Studios. The game follows the adventures of chimp space travellers Chip and Buck as they make their way across planetary systems on an inter-stellar treasure hunt. Players are whisked along at dizzying speeds and on the way encounter a variety of thrilling features, including free spins, respins and expanding wilds.

The banana fun really gets underway full-blast when the slot’s wild symbol lands on any of the middle three reels. This triggers the Cosmic Respins feature and causes the wild symbol to expand and fill the entire reel on which it has landed, making possible some pretty amazing wins.

There’s also a Free Spins bonus round to contend with as the chimps in charge of the helm make their way at warp-speeds across hyperspace, the player in tow. Landing three or more of the game’s scatter symbols on reels two, three and four triggers the Free Spins bonus round. 10 spins are awarded and there is also the potential of unlocking additional expanding wild symbols capable of really potentiating wins.

Microgaming Happy With The Result

Microgaming’s Director of Global Operations, James Buchanan, is well pleased with the Banana Odyssey end-result. Buchanan described the Slingshot-developed slot as a true testament to Microgaming’s own commitment towards diverse and quality content.

The original concept for Banana Odyssey was teased on one of the games giant’s interactive games concept days, after which was released for an exclusive period spanning two months with acclaimed operator Twin. The exclusive-release test phase proved highly successful among Twin’s players and so it was decided that Banana Odyssey would be made available to Microgaming’s global audience of operators and players.

Banana Odyssey is the coming together of pleasing visuals, a toe-tapping soundtrack, and a host of rewarding and entertaining games mechanics, said Buchanan as part of Microgaming’s official press release announcement. The slot is now available at all Microgaming-participating operators on desktop and mobile.