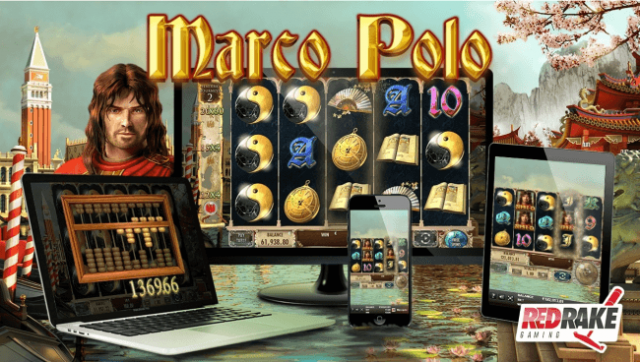 Independent development studios, the Anime-focused Asian gang and the quirky home-based characters doing their thing on the outskirts of London, Prague and Berlin may be doing their bit for unique and unconventional slots, but that doesn’t mean that there aren’t any mainstream development houses adding their own unique touch to the gaming world. Enter into the picture the Red Rake Gaming team; by no means small fry, but certainly making headlines with an array of very special slots; the latest being a game that goes by name of Marco Polo.

Unconventional, quirky, interesting and colourful, Red Rake’s Marco Polo online video slot has been officially launched into the ether and will be presented with a lot of fair in true Red Rake style at this year’s G2E Asia Trade Fair, which will run from May 21st to May 23rd.

Welcome To The Silk Road

The game is set on and themed around the grand splendour of the Silk Road and one of modern civilisation’s most celebrated adventurers and explorers, Marco Polo, is at the centre of it all. The journey starts in Marco Polo’s home-town, the beautiful and serene city of Venice; one often cited as the actual city of love due to its serene waterways and old-school romantic culture.

Red Rake certainly did not spare any expense in creating a game that reminds the player of something straight out of a splendid history book that has magically come alive in a truly grand and momentous style. Those who wish to enter the legendary Silk Road must first land a combination of the game’s bonus Yin Yan symbols onto the reels. Master this and you’ve mastered the secret to riches as this special location doubles up as Marco Polo’s free spins bonus round.

Perhaps most exciting of all is that Marco Polo is the slot’s wild symbol and in this case will not only transform standard symbols into pure magic, but will also stand in for the Yin Yan. Different, exciting and rewarding, all rolled into one; such is the story of Red Rake Gaming’s modern-day Silk Road adventure.

Marco Polo will leave any player familiar with Red Rake’s many award-winning titles with a distinct feeling of just having discovered the culmination of many years’ worth of hard work and sheer dedication to the world of slots and casino software development.

Spin the reels of the worlds TOP SLOTS! Play to WIN online.