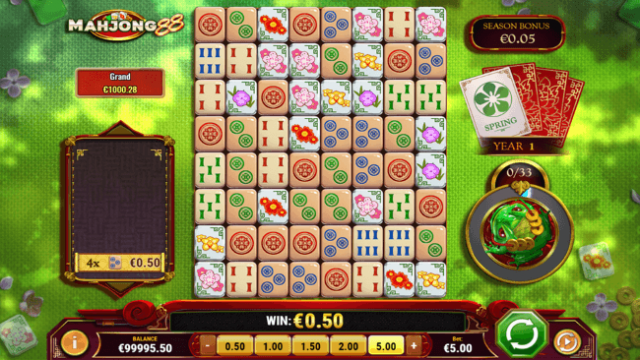 Casino software giant Play’n GO has just released a brand new slot, and it’s based on none other than the popular tile game, Mahjong. Mahjong 88 is a true celebration of Chinese culture and the prominence of the lucky number 8. Not everyone is aware of the fact that the game has its roots embedded deep into Chinese culture, and many people only discovered it for the first time when Microsoft launched a digital version on one of the Windows platforms.

Mahjong was in all likelihood developed during the time of China’s Qing dynasty, and spread to the United States from there on out. Most of the theories about the exact origin of the game are rather fanciful; some even completely unsubstantiated. But the actual history is more of a slow evolution than a single start somewhere.

Whichever way the tile falls, it was about time someone redeveloped the popular classic concept into an online video slot.

Play’n GO’s Mahjong 88 is played on 8 reels and 8 rows under the watchful eye of a frog looking on from the side of a pretty pond as the reels spin away. A combination of four more symbols on a row constitutes a win and in true Mahjong style, once a group of winning symbols fall away, the winning tiles are replaced by new tiles on the reels.

It’s quite remarkable how the developer managed to create a very similar feeling to that experienced whilst playing classic Mahjong; something that the Play’n GO team has mastered many times in the past with many a popular theme.

A Win For Every Season

Mahjong 88 pays homage to the seasons found in nature and every time the seasons change from one to the next, the opportunity of a new bonus comes into play too. The frog is a real moneymaker and uses his special powers to transform symbols on the reels. This is done in a very animated fashion. In addition to the frog’s own antics, there are also wild tiles capable of transforming into any other tile to complete a four-tile combo win.

Mahjong 88 boasts a 96.62% RTP, which isn’t bad for a standard online video slot. The game has already been released by the developer and is now available to play at all Play’n GO-participating operators.

Experience the THRILL of unique slots games. Sign up and play ONLINE!