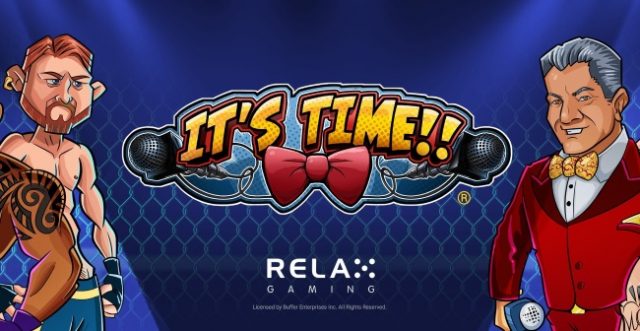 The development ink is barely even dry on the digital sketchpad that brought us the very first network branded game from the ranks of Relaxed Gaming and we’re already being teased with the second release in the series. The Malta-headquartered firm’s second slot, not unlike the recently-released Let’s Get Ready To Rumble, continues to embroider further on the boxing (and MMA!) theme and this time round IT’S TIME!! features the “voice of MMA” Bruce Buffer (brother Michael Buffer starred as the in-game celebrity during the first release).

Six reels and four rows make up the grid and the game’s high volatility nature opens the ring in favour of players potentially being able to bank on winning up to 2,500x the value of the current bet. Various bonus mini-games have been built into IT’S TIME!! main make-up and with names like Hot Spot, Fighter Bonus and Buffer Bonus it’s easy to imagine wins that are both hot and rapid.

Despite the various similarities that exist between the two releases, IT’S TIME!! is without a doubt the more volatile. Volatility is however not at all a bad thing, as any true slot connoisseur will immediately tell you. It may be a more random sequel playing itself out the reels, but the fact of the matter is, there’s nothing like a high-volatility slot to make those massive wins role in.

And besides, the bonus games and free spins make the volatile nature of IT’S TIME!! worth the extra issue of the unknowable. The Fighter Bonus is a good example of this. In the lucky event of the free spins being triggered, players suddenly find themselves up against a total of 4 MMA fighters. Whenever a fighter appears on the reels during the game, it will remain fixed in position. Once the bonus is complete, the fighter having the most visible symbols of its kind on the reels, wins the round. But best of all is that all of the remaining symbols on the reels are then turned wild. Talk about a win-win situation!

The Perfect Round Up

There are other bonuses too, each bringing its own element of excitement to the party. The slot has a Return to Player percentage of 96.74%, which isn’t at all a raw deal given the volatile nature of the game.

It all comes together with the package deal being perfectly rounded off with superb animations and a super cool soundtrack. IT’S TIME!! is bound to become every bit the smash hit as what did the first release in the series.