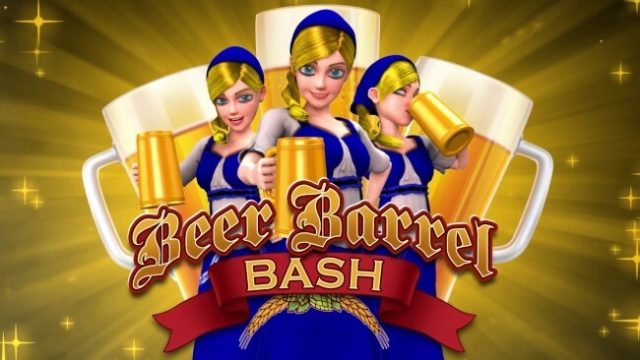 As we head into the second half of the year we can expect to see a large number of new slots being pumped out by the iGaming world’s top developers. It’s an exciting time of year and thanks to a new release by High 5 Games it’s obvious that we’re headed towards an all-time slots high. Beer Barrel Bash will appeal to any self-respecting proud and cultured German player, but also to just about anyone who loves beer, bratwurst, pretzels, and a healthy dose of the good life in general. And really, who doesn’t?

To make the entire affair even more of a pleasurable adventure, the developer has incorporated some significant opportunities to win big-time. Oktoberfest has never before in the world of online slots been quite as much of a hoot as with Beer Barrel Bash.

Beer Barrel Bash is positively jam-packed with special features and refreshing add-ons. These include a Lasting Loot feature. Any wilds landed on the reels for the duration of the feature are locked solidly into place. Just image the potential size of the wins! There’s also what’s known as a Double or Triple Split symbol that locks into place during consecutive wins. The game awards winning by offering up even more and better awards.

The game has officially gone live and is now available for everyone’s enjoyment. Beer Barrel Bash can be accessed via High 5’s game server, namely the High 5 Vault. Only licensed and participating operators have access to the content vault and players interested in enjoying a bit of Oktoberfest fun are encouraged to look for online casinos that feature High 5’s slots.

But the slot not only promises to bring joy untold to players all over the regulated world, but it’s also a matter of pride for High 5 to be in a position to launch the game. High 5 Games Senior Manager and Client Partner Lauren Gazneli has issued a public invitation to players around the world to lift their beer mugs and join in on the Beer Barrel Bash-ing fun of it all.

The developer appears to be quite proud about its latest creation and promised that the festivities, once launched, is bound to last well into the night. Which really is developer talk for saying that this one is bound to go down like a damn good book (or beer!).

Experience the thrill of playing slots ONLINE. See if YOU can hit the JACKPOT!