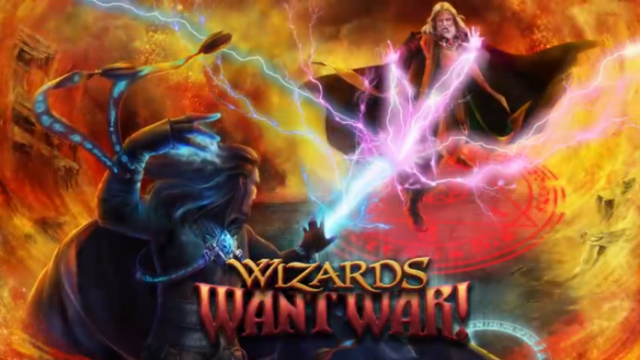 If two powerful Warlocks battling it out in a battle on the reels is your idea of fun, then be sure not to miss out on the latest slot by Habanero Systems BV. The developer has just released its new Wizards Want War! slot, and its already attracting the attention of many a positive critic on the review front.

As for Habanero itself, the developer is beaming with pride over its latest creation and has described Wizards Want War! as the coming together of pure slot entertainment, superb and lively graphics and gameplay and a popular modern fantasy-club style theme. The game is simply bursting with wizardry action and it’s easy to see why Habanero regards its newest creation as one of its best to date.

The new game revolves around a 5-reel 25-payline themed online video slot setup. There are bonus events aplenty and one of the significant highlights of the game is without a doubt the fact that a player is able to cluster up to six wild symbols whenever a wizard symbol lands on reels 1 and 5 during a single spin.

Performing this special trick will being about the ultimate dual between the two wizards. Best of all is that a player lucky enough to trigger successive battles will discover the superb winning power of what is referred to as a nonuple – or 9 – multiplier. The winning possibilities literally are endless and the latest Habanero slot has what it takes to award the types of wins that dreams are made of.

This Way To The Gold

It’s this big-win attitude that has undoubtedly been the same force to catapult the developer to the plains of success that it currently occupies. Habanero has inked content deals with various operators over the course of recent months and the success in business is starting to show right down to development levels.

Habanero has said that the key to reaching its own personal business milestones is considered to be expansion into more markets than ever before. By doing this, Habanero will not only attract more business as more players sign up and play, prompting in turn more operators to make use of its proprietary slots and other games, but it will also ensure that a more effective buffer is put into place in terms of regulatory uncertainties. Many developers are adopting the expansion approach as they investigate new ways by which to remain relevant and stay afloat.