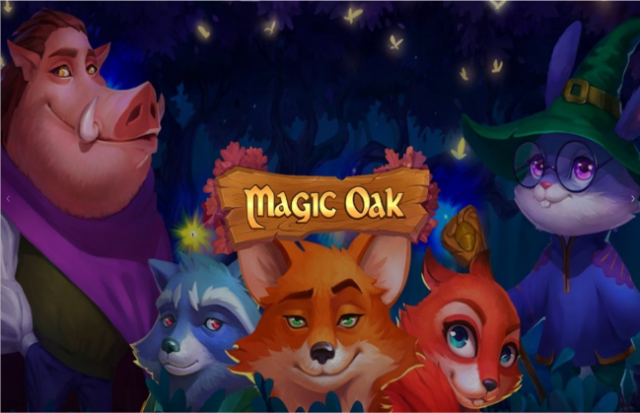 Award-winning online casino software developer Habanero has just released a new slot that will whisk you away to the heart of the Enchanted Forest. Magic Oak is sure to make the fantasy come alive for even the most sceptical players, and its all set in a wonderful woodland capable of melting even the most hardest of hearts.

It’s a true touch of sparkle and features detailed characters of all sorts of fur and feathers. On the reels, players will meet up with an animal family of interesting characters, including a rabbit, owl, fox, boar and a squirrel. The animals are quite capable of making the money fall, and wins are tallied in blocks instead of on traditional lines.

Symbols pay when grouped together, but the difference is that this happens when the groupings appear in blocks. The straight-line typical slot format isn’t anywhere to be seen.

Magic Oak Is One Of Many

Anyone who has been following new slot developments of late will know that Magic Oak isn’t the only recent game to have been released by Habanero. In fact, the developer appears to be quite intent on populating casino news headlines almost entirely of itself. An entire collection of new titles has hit the ether of late, including Hot Hot Fruit, Pumpkin Patch, Jump!, Mount Mazuma and 5 Lucky Lions.

And if that appears to be more than just a mouthful, then be prepared to be amazed because according to the prolific Habanero team, there are many more games to follow from where all of that came from.

According to Toni Karapetrov, Head of Corporate Communications at Habanero, incorporating the new ways-to-win blocked style of play was an important consideration right from the start of development.

New gamification mechanics add a great deal of value to slots, and according to Karapetrov, coming up with exciting new mechanics is high on the developer’s priority list. Magic Oak is sure to appeal to players looking for an extra level of engagement and excitement and that’s what the goal was to begin with, said Karapetrov.

It’s exciting to wait and see what the against-the-grain developer will come up with next.

Get those reels turning and the wins rolling in! Play TOP ONLINE SLOTS 24/7.