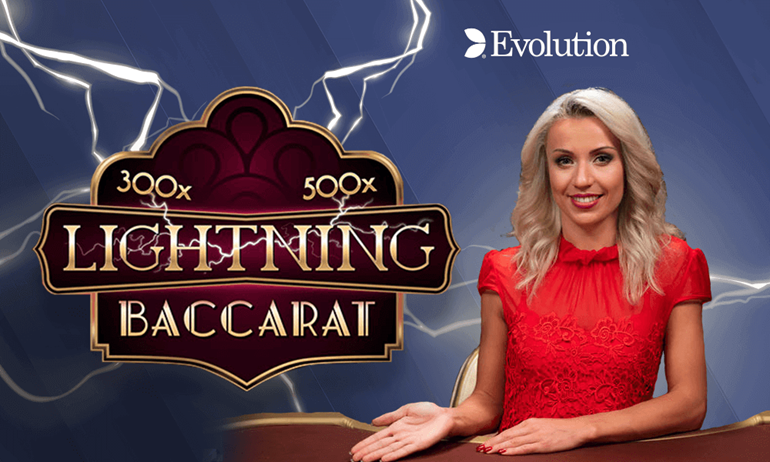 Live casino games industry leader Evolution Gaming has just added a brand-new title to its Lightning series of games: Lightning Baccarat. Following in the footsteps of the smash-hit Lightning Roulette and the equally popular Lightning Dice live casino releases, Lightning Baccarat is expected to be every bit as good as its two series-predecessors.

As is the case with both Lightning Roulette as well as Lightning Dice, the latest title released under the portfolio of games will be broadcast to operators via one of Evolution Gaming’s live casino gaming broadcast studios.

What’s With The Hype?

Lightning Baccarat at first plays out just like any other traditional hand of first-round Baccarat. However, the minute the initial hand expires, things start to change significantly. For a start, Evolution’s trademark lightning and thunder effect is unleashed onto the cards in play. A selection of the cards is at this point at random selected and awarded a specific multiplier value.

This is where it starts to get really exciting as players must now match their cards with the lightning card(s) in order to verify whether they are holding onto a “match”. If this does indeed turn out to be the case, a multiplier of up to 512x the player’s initial bet is awarded. Talk about praying to be struck twice! Lightning Baccarat is compatible with all desktop and mobile devices and operating systems, so it can be played anywhere anytime.

Evolution Gaming’s own excitement about the new release is nothing short of contagious. Todd Haushalter, Evolution Chief Product Officer, whilst commenting on how it all started for the studio’s Lightning series of games, said that the team knew that it was onto something shortly after the release of Lightning Roulette. The game proved massively popular among players, which then led to the development of the second title in the series, namely Lightning Dice.

The concept is obviously a very popular one with Evolution Gaming’s global player base. This stands to reason given the multiplier win possibilities, let alone the stand-alone popularity of games like Roulette and Baccarat; not to mention dice-based entertainment.

Lightning Baccarat is now available to play world-wide and will hopefully not be the last instalment to be released as part of the popular series of live casino games. Winning is effortless as well as entertaining with Evolution Gaming.