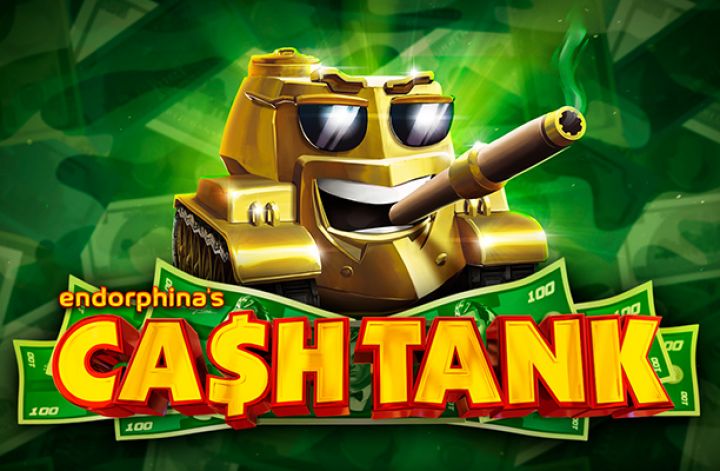 Leading online casino software developer Endorphina Gaming is ready for some battle tank action and has just released the latest game to be added to its impressive portfolio of slots: Cash Tank. Simple and uncluttered but most definitely more than up to awarding some pretty amazing wins, Endorphina’s new Cash Tank slot is bound to turn more than just a few heads.

Not only is the new slot 100% compatible with all operating systems; on both desktop as well as mobile devices; but it’s also the type of game that engages the player not by being chock-jammed with unnecessary bells and whistles, but by instead getting right down to the business at hand, which is of course pure online gaming entertainment.

Everyone’s Invited To The Party

True to the developer’s habit of including everybody, regardless of levels of expertise or budget, the game offers to players a wide variety of bet options and sizes. What ultimately determines the amount of spend on any given session is the fact that not only are there 10 paylines, but that players are at liberty to bet anything from a minimum of 1.00 up to a maximum of 10 per spin of the reels.

And since the paylines aren’t fixed, a total bet doesn’t have to amount to any more than 0.10 max. But with that having been said, there’s a very good reason to engage all 10 of the game’s paylines on a single spin. What Endorphina has done, is to allow players to actually win in both directions on any single payline. The only criterium is that winning combination must consist of matching a chain of at least 3 symbols at a time. Also, winning combinations must start from either reel number 1 or reel number 5.

The 3x5 grid makes provision for a total of 15 symbols to fall into view during any given spin. Symbols are colourfully designed and speak of the wonders of wealth and riches – a bag of gold bars, a golden dollar symbol, a bundle of cold hard cash and a golden credit card complete the extravagant picture.

And there’s a great deal to be said for maximised wagering paying out at up to 1,000 whenever players strike it lucky by landing a full-house 5-set if golden dollar symbols. Endorphina’s Cash Tank slot may not be all that in the free spins department, but the game certainly makes up for it with the regular appearance of the Wild Cash Tank symbol.

Get ready to WIN. Hit the JACKPOT playing slots online!