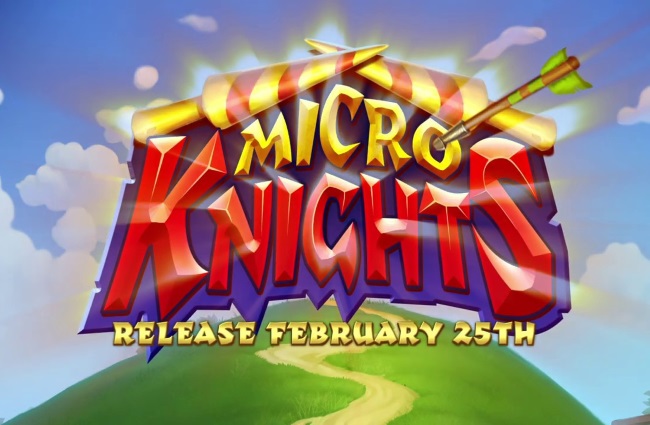 Elk Studios has released a new title as part of its ELK Friends Series. Micro Knights is an adventure-style slot that invites the player to become part of a defence force tasked with the honourable responsibility of defending the kingdom walls of Chatoux Prix. Three valiant knights are in charge of the safety of the castle and its citizens – Sir Smash, Sir Count and Sir Charge. Players are invited to join in on the adventure of eliminating all possible threats to dragon king Chalcedony’s palace and kingdom.

Micro Knights is adventure style as well as highly action packed, and presents players with a great deal to discover along the way. The 7x7 symbol grid lends itself to clusters of symbols dropping down and into view, with 5 or more matching symbols in any cluster generating a win.

The Knights & Their Features

A special and definitely very exciting addition to Micro Knights is what is referred to as the symbol queue. The queue collects a on-reserve selection of symbols as time wears on. These symbols are right and ready to be matched with symbols that have already fallen onto the grid as part of a cluster of symbols. The symbol reserve is able to really boost the numbers and generate some pretty superb win-combinations.

But the true stars of the slot show are the valiant knights tasked with protecting the kingdom. Sir Charge is forever on the ready and sticks around to the left of the grid. He will at random intervals charge the symbol grid at the end of any given cluster-flow and will literally push everything that falls into his way downwards and into the symbol queue. Those symbols will ten continue to refill and compliment the clusters on the grid for some massive wins.

Symbol Reserve For The Charm

Sir Smashing is stationed at the upper left corner of the Micro Knights grid. He is in the regular habit of smashing his sceptre and making the game shake and adding one more symbol to the symbol queue. And then of course there’s the Counting Knight. Sir Count does exactly that implied by his name. He keeps calm and keeps the count by keeping tabs on the size of the winning clusters.

He will decide to at his own leisure hand out some game-saving features when necessary and will do this by making use of six different flags. He keeps tabs on every which win, irrespective of the size of that win. But the bigger the win – the more symbols added to the meter.