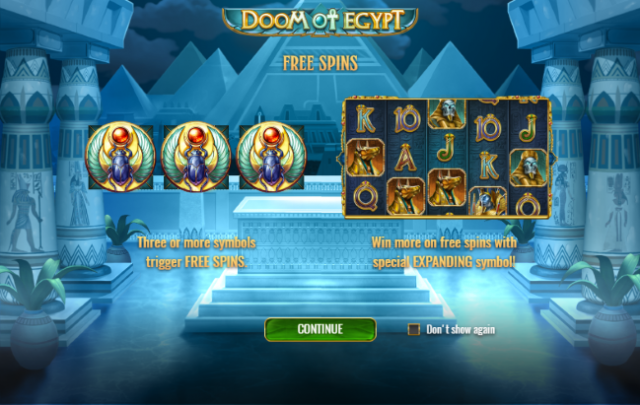 It’s been quite some time since we’ve seen an Ancient Egypt-inspired slot hit the market.
This is a theme named by millions of players as being their ultimate favourite of all, and thanks to Play’n GO, the gap has been closed once more. The developer recently announced the release of Doom of Egypt and in true Play’n GO-style, this one is bound to become a firm favourite for more reasons than its Egyptians storyline.

Doom of Egypt’s reels are populated by Egyptian royalty. Three Pharaohs are the stars of the Doom of Egypt show and these are also the game’s high-paying symbols. Players only need match a minimum of two of the themed symbols on any one of the slot’s 10 paylines in order to register a win on the royals.

In an attempt to mix things up, the developer has also incorporated a selection of lower-paying symbols. These are the usual playing card symbol culprits, ranging from the number 10 to the letter A. In addition to these paying out somewhat more conservatively when compared to the slot’s themed symbols, winning requires a bit more effort on the part of lady luck as these pay out whenever 3 or more matching symbols appear from left to right on any single payline.

There’s also a fantastic bonus that involves awarding free spins to the player whenever or more of the sacred Egyptian scarab beetles are landed anywhere on the slot’s reels. The scarab also pulls a double act in that its also the slot’s wild symbol; meaning that its able to transform itself into any other symbol on the reels whenever a filler is needed to complete a match.

Ten free spins are the instant reward whenever the sacred scarabs do their magic on the reels. But that’s not all that there is to the slots free spins bonus, because whenever the special feature sis triggered, the game will randomly select a symbol and make that symbol to expand across entire reels. The only symbol excepted from this is the scarab scatter.

The possibility exists that expanding symbol may cover the entire grid. This obviously makes for potentially massive wins during the bonus game coupled with pretty amazing payouts. The game is now available to play at all Play’n GO participating operators. First impressions are everything and judging by what we’ve seen so far, Doom of Egypt will have no shortage of die-hard supporters.

See if ONLINE SLOTS can make you a WINNER! Play for a JACKPOT online.