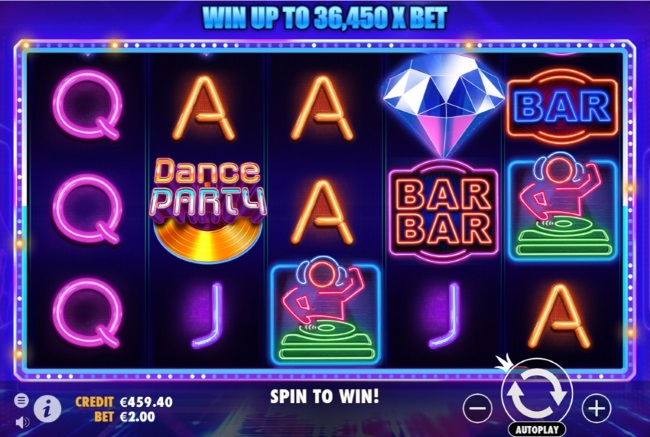 If there’s one party not to be missed, and especially since most of us now have a bit of extra free time on our hands, then its Pragmatic Play’s new Dance Party online video slot. The gaming giant on Tuesday released information about its latest creation and described the new release as a “fresh” three-row game that is nothing short of an electric slot title.

Read More... The Stars Group At Ease But Aware Amid Covid-19

It’s an invitation to join the disco, continued the announcement, complete with neon-splashed reels and an inviting and engaging setting to boot. Pragmatic Play has obviously been making the most of its own time too as the new Dance Party slot is being released hot on the heels Aztec Bonanza and the equally popular The Wild Machine.

Multipliers are apparently the charm this time round, and these enjoy a strong presence once the free spins bonus has been activated. The free spins round is triggered by landing five of the Dance Party scatter symbols, represented by images of diamonds.

This also happens to be how the dancefloor truly comes to the fore. Playing one’s cards right will lead to a trip to the middle of the dance floor and the opportunity to land what the developer describes as a “knockout” move complete with up to 60 completely free spins! But that’s not all. In addition to the charged-up free spins on offer, there are also a series of progressive jackpot prizes up for grabs. These award up to 30x the current bet at any given time.

Dance Party offers to players 243 Ways to Win, says Melissa Summerfield, who is the Chief Commercial Officer for Pragmatic Play Limited. Its high-energy, said Summerfield, as well as a whole lot of fun too. The very design of the new online video slot revolves around keeping players fully immersed in the bright lights and catchy music being blasted from the Dance Party night club.

It’s a real nostalgic trip back to the glory days of disco, continues the statement. The free spins mode may mean a multiplier of up to a nearly inconceivable 36,450x the player’s bet. The statement concludes by claiming that Dance Party will be a night that is completely unforgettable.

The game has already been launched by Pragmatic Play on all participating operator platforms and is now available to all players looking for a fun night out on the town on desktop or mobile.