New Champions of Rome Slot On the Way 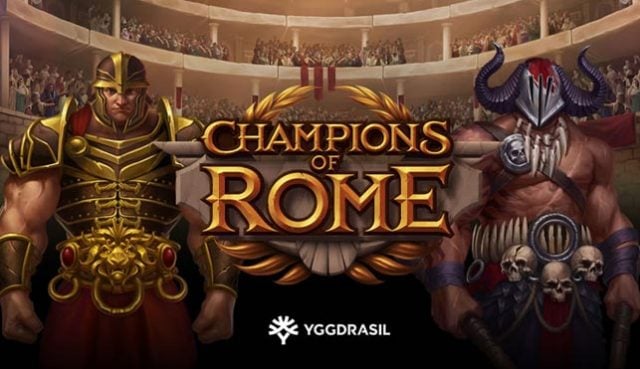 Yggdrasil Gaming’s upcoming slot release will undoubtedly thrill those who have a soft spot for history. Champions of Rome will pair an epic Ancient Roman story with authentic sounds, graphics and features for a brilliant historical title. Of course, big wins and memorable bonuses will also be part of the mix!

Along with 5 reels and 20 paylines, the title has a few different Gladiator wilds, multipliers of up to 4x, and a free spins feature to boost your winning potential. The slot is set to be medium volatility, offering a maximum cash payout of up to 3,000x your stake (which translates to $30,000.)

Wagering in Champions of Rome will start at just $0.20 per spin, which will make the title perfect for those who are on a budget or looking to keep their entertainment costs low. On the other hand, if you’d prefer to take the emperor’s route and wager as much as possible, you can bet up to $100.00 per spin as well. The RTP has been confirmed at 96.4%, putting it at the industry standard for online slots.

As mentioned above, it’s the bonus features that really stand out in Champions of Rome, and there are also some more elaborate options for those who want to get involved on a deeper level. These bonuses start off with the wild symbol, which features a regal Roman eagle as its emblem.

Landing two scatters on the reels will trigger the Gladiator feature, in which a weapon will be thrown at the base game’s reels. If the sword appears, you will receive a stacked wild and two regular wild icons. If it’s the mace that shows its face, you will be graced with two wild stacks. And finally, if the trident appears, you will enjoy four standard, random wilds added to the grid.

Land three or more scatters and the feature will get even better with the addition of free spins. A hefty 600x cash prize is also on offer here if you manage to land 5 scatters in a row!

The free games feature has two modes to choose from; one called Training with 8 regular spins, and the other called Deathmatch. The latter has three different levels and quadruple multipliers on offer, but you will need to win at least 450 coins for the multipliers to apply. If you don’t manage to meet the threshold, then your winnings will be forfeited and you’ll bag a consolation coin prize instead.

The area in which Champions of Rome stands out the most, aside from its bonuses, is probably its graphics. Yggdrasil has an excellent track record when it comes to its sleek desktop and mobile visuals, and with Ancient Rome as inspiration, players can expect plenty of HD imagery of old-time weapons, gladiators, elaborate stone carvings and shining golden coins. The new slot will hit Canadian casinos later this month.

Experience an epic online slots adventure NOW!
See if YOU can hit the jackpot.