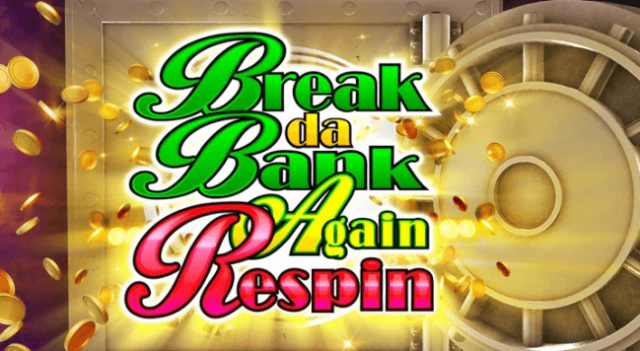 It’s official. The much-anticipated 3rd instalment in Microgaming’s Break da Bank series of online slots has just been launched, and it boasts 5 reels and 9 paylines of pure and unadulterated online gaming fun. Break da Bank Again Respin was developed for the casino games giant by the latest addition to its independent studio developer family, the American-style development team at Gameburger Studios.

The latest addition to the Break da Bank series, said Microgaming in the official online press release, intends to further elaborate on the basic theme connected to the award-winning series of slots. It’s a glorious unlocking of all of the classic features associated with the original concept, with the added bonus of more elements of exciting play having been incorporated and included in the latest release.

All of the popular usual suspects are starring on the reels of the latest release, including up to 25 free spins, strategic paid respins being part of the special Hyperspins™ feature, and the possibility of developing one’s own custom strategy thanks to opting in on higher-stakes play that makes it possible to trigger free spins more often. The customisation is linked to the exciting new Respin mechanic. Break da Bank Again Respins is a smart and intuitive slot that appears to re-invent itself based on each player’s particular style of play.

All About Gameburger Studios

Gameburger Studios is the latest inclusion in terms of Microgaming’s independent studio partner model. The re-imagination of the much-loved classic land-based casino experience will be the main focus, said Microgaming in a recent online announcement. Delivering an interactive and engaging online slots experience will be the main order of business for Gameburger Studios and the team is considered to be the best band of men and women for the job.

Classic American-style gaming will stand central to the basic theme of every new release developed by the Gameburger team and the aim is to bring American-style gaming to non-American players. Microgaming’s independent development studio approach has paid off massive dividends so far and judging by the entertainment quality encapsulated in Break da Bank Again Respins, the team at Gameburger Studios is absolutely cut out for the job.

Are YOU ready to spin and WIN? Play Canada’s finest slots ONLINE!