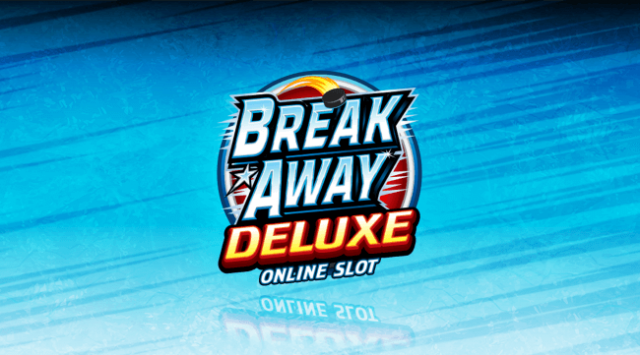 Do you count yourself to be a supreme and die-hard ice hockey fan? Then remember to thank Stormcraft, independent developer for software giant Microgaming, because the smash hit ice hockey slot Break Away has made a comeback and its time to glide effortlessly towards the win thanks to new Break Away Deluxe. Those familiar with Microgaming’s family of independent developers now working under the umbrella of the casino software giant will know that Stormcraft also gave us Agent Jane Blonde Returns and Dragon Shard.

Break Away Deluxe is smoother and faster and all-round more exciting than the initial Break Away release and it bounced onto player’s screens on July 23rd.

The slot is a show of high-volatility action and it’s a celebration of fun. Stormcraft has ensured that only their best efforts were put into making the game a mobile-first application. This means that mobile users will experience no hiccups whatsoever when trying to access the game from their handheld or other mobile devices.

In fact, a renewed and intensified focus on mobile games is at the order of the day and this is true industry-wide. Microgaming has been around and creating top quality slots for a very long time and its easy to see why Stormcraft was deemed up to the task of creating a worthy follow-up release.

Break Away Deluxe features the popular proprietary Rolling Reels feature and players are able to choose whether they want to play 18, 38, 68 or 88 paylines. The more paylines selected, the better the chances of scoring big on the win.

Super Stacked Wilds are an exciting addition and best of all is that these are available during the base game. These little bonus-makers will appear on reels three, four and five. There’s also the Smashing Wild feature and it makes its return bigger and better than before. The feature randomly turns one of the middle reels to be completely wild. It will also lock the wild reel into place, making for even more magnificent wins.

Three or more scatter symbols anywhere on the reels ups the ante even more. This will activate the  free spins bonus round. Not only are 12 free spins up for grabs, but also a superb multiplier trail with a multiplier value of up to x8.

Break Away Deluxe is now live at all Microgaming operators.

Get YOUR hands on the biggest JACKPOTS online. Play top slots TODAY!