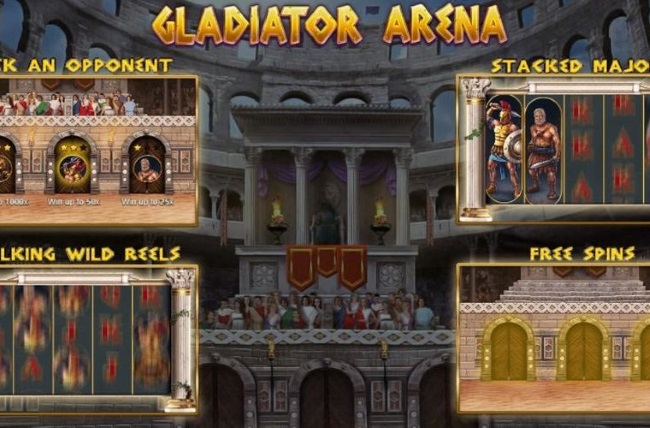 Booming Games Limited is treating its fans to yet another top-notch online slot, and hot on the heels of the previous one too! Its Wild Energy slot isn’t even cold off the production press and already the developer has announced that its ready to premiere its latest creation, the adventure-style Gladiator Arena.

Five reels and 20 paylines will see all of the best gladiator action convene on the grid. The company employed the services of an official European Gaming Media and Events press release for the purpose of breaking the news to the industry and its fans regarding the newest slot soon to be doing the rounds on the entertainment block.

What To Expect Once In The Arena

And now that the biggest fight that the Colosseum has ever seen is officially on the cards, it’s time for players to get a sneak-peek into what they may expect upon entering the Gladiator Arena. It’s easy to spot that good old Booming games charm and players are in for a gladiator-themed fight festival. The higher-paying symbols are all themed after the gladiators who fought so valiantly for honour and for love across the ages.

The game also features a Pick-Me free spins bonus, and here, players can really make up some significant wins without having to spend a dime. The feature is quite special in that it’s jam-packed with its own set of bonus treats. Walking Wilds populate the reels all throughout the free spins and stacked majors are a regular instalment too. The Pick-Me free spins bonus is triggered by landing three or more chariot symbols anywhere on the slot’s reels during a single spin and bet wagered.

But that’s not all – the slot also includes a second bonus instalment, namely the Battle bonus game. Here, players will be at liberty to make their own selection of a chosen opponent. Choosing wisely may mean the ultimate glory and gold. The stronger the opponent, the higher the potential reward. Taking on the ferocious lion, for example, if the player does end up successful in the pursuit for fame and fortune, will attract a much higher reward than, say, choosing to go to battle with an “experienced but old and weathered veteran”.

Gladiator Arena is a medium-volatility slot and is bound to become an instant hit among players looking to really make the most of racking up some serious profits. The slot features a superb 1000 x bet jackpot prize, so entering the arena could well be richly rewarding for those who have the heart of a Gladiator!