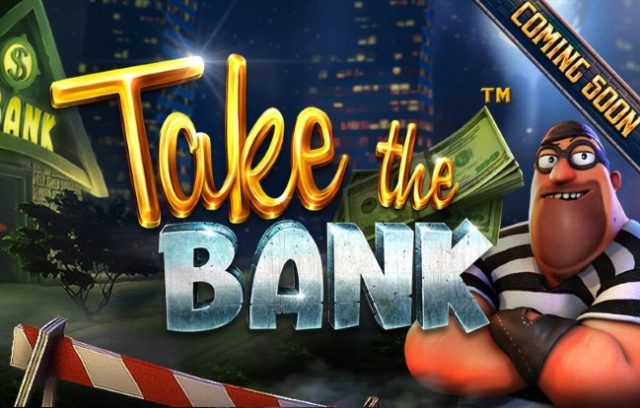 Forget about breaking the bank; Betsoft Gaming is taking the bank instead. The developer has just announced the release of its superb new Take The Bank slot, and this is going to be one for the history books for sure. Its bombs away for the biggest bank cash heist in the history of famous robberies and the mastermind money-looting genius at the center of the money storm is none other than the player.

5 reels and 75 paylines is how it all goes down, and down it most definitely goes in terms of the win and making money. And as if winning the mother lode of all loot isn’t exciting an adventure enough, Betsoft has in its winner-making wisdom included a special Master Bomb Counter. And its exactly that; a counter. The Master Bomb Counter keeps a tally of every spin of the reels. For every spin, the counter will move down a number in the direction of 10 to zero. Once zero is reached, something very special happens on the slot’s reels in that every last one of the robber symbols accumulated during the most recent 10 spins will magically transform into wild bomb symbols. Now that’s true Vegas style bank robbery shenanigans for the win!

Police For the Big Win

Law enforcement is out in full force on the day of the robbery but there’s no need to fear the police cars roaming the streets of this particular slot game. Each time three or more police cars land in scattered fashion on the slot’s reels, 15 free spins will be awarded to the player.

At this point the Master Bomb Counter will stop ticking and 5, 7 or 10 wild scatters will take its place on the bonus-meter. Better yet is that these wilds are in the habit of jumping ship. With each spin of the reels, the wilds will change position to make provision for even more fantastic win opportunities during the special bonus game.

In Other Betsoft News

Betsoft has been all out on the development town and it’s easy to see why their games are popular among players from all walks of life. There’s a grand appeal that runs like a silver thread through each of the developer’s creations. But Betsoft has been working hard at securing significant partnerships too. The recent partnership deal clinched with Bombagames will ensure that Betsoft is able to expand its reach even further into Europe.

Get those SLOT’S reels SPINNING! Seek out a JACKPOT win online.