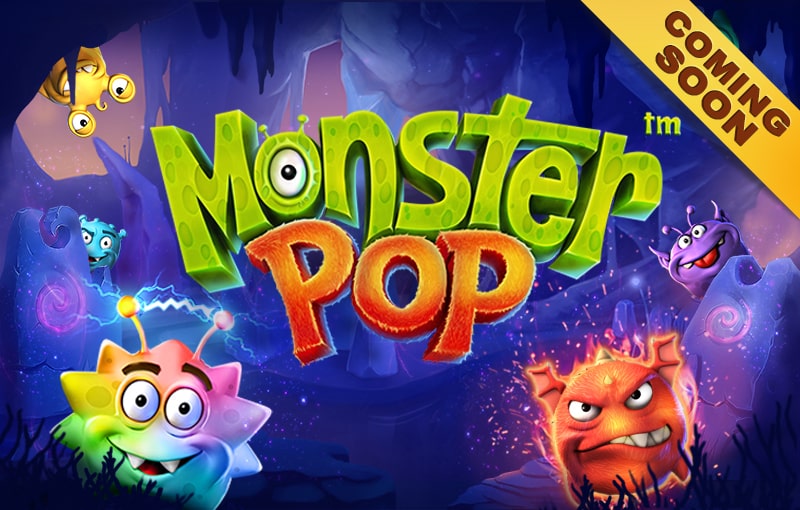 Betsoft Gaming is finally back with a brand new slot. Monster Pop is due for release at desktop and mobile casinos on March the 26th and since Betsoft has been suspiciously absent on the new games release front, fans will be expecting nothing short of a masterpiece. Whether Monster Pop will turn out to be all that remains to be seen, but the developer has opted for a whole new direction with its latest game as it boasts amazing 3D graphics, amongst other awesome features.

Instead of following the usual style of standard payline combos and wins, Monster Pop will also feature Cluster Pays. This is unusual for the developer but will in all likelihood mean a fresh new spin on an old way of doing things.

What Are Cluster Pays?

How Cluster Pays work is that instead of symbols aligning in a typical row-by-row organised fashion on any number of paylines, symbols now spin into view from any which direction on the screen. Also, symbols enter into the equation in clusters that ultimately convene to form matching reel symbols.

The magic happens when the symbol combinations appear in matching clusters. The more matching reel symbols clustered together as a result of a spin, the bigger the payouts. And since Monster Pop will be boasting a not-too-shabby 94.67% RTP, the expectation is that those winning clusters won’t be too hard to come by.

Monster Pop may not exactly be of the high variance variety, but what with the slot expected to feature a jackpot pay-out of 2270.6x the player’s initial base-game bet amount, it’s not a matter of it being stingy on the big pays either.

Coupled with the awesome 3D graphics and pretty cool sound effects, the big wins are bound to draw players into playing, as well as coming back for more. All of this is made all the more rewarding by the inclusion of a free spins bonus round, and in order to trigger free spins, 3 scatter symbols simply need to land anywhere on the reels at any one time.

Betsoft Gaming may have been slightly quiet as far as new games go, but that certainly doesn’t mean that the developer is in any way rusty or no longer capable of creating award-winning content. Judging by pre-release sneak peeks of Monster Pop, this won’t be happening for a long time to come still. Betsoft very much still has its thumb placed firmly on the industry’s pulse.