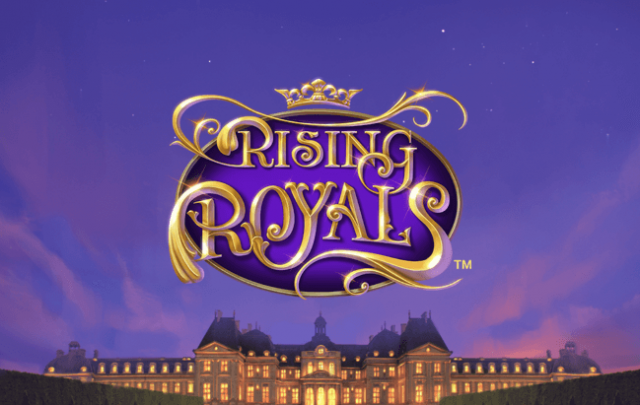 With the launch of their latest slot Rising Royals, Microgaming is going all out, and it’s all thanks to the creative prowess of independent studio partner Just For The Win (JFTW). This is of course the same creative team that brought us superstar hits like Tweethearts and Deco Diamonds Deluxe. JFTW was one of the first independent partners to have been welcomed to the Microgaming independent studio partner family and it’s easy to understand why when considering the sheer quality of the games to have been released by the studio under the Microgaming brand umbrella.

Rising Royals is a celebration of riches, of wealth unimaginable and of opulence untold. The game tells the story of the royal family in residence at the luxurious Palace of Versailles and players are invited to attend the grand royal ball in the lavish gardens surrounding the palace. 5 reels and 20 paylines complete the idyllic picture.

The palace gardens are dressed in colourful flowers and glitzy chandeliers for this very special and magic occasion. It’s the opportunity to rub shoulders with those born into wealth and honour. The king, queen and handsome young prince make regular guest appearances on the slot’s reels and each time anyone of them do, it’s bonus time for the player as the royal symbols double up as the highest paying of all of the symbols combined. Other symbols on the reels include flowers dressed in every conceivable colour and also the special Rising Royals bonus symbol.

As previously mentioned, the members of the French royal family adorn themselves with wealth that is fit exclusively for a king in terms of monetary value and are eager to share this kingly and queenly wealth with the player. The three royals act as the high-paying symbols and landing members of the royal family in any combination on the reels will activate the Symbol Lock Re-Spin feature. These re-spins will continue to spin until such time as no more royal family symbols appear on the game’s reels.

But the esteemed members of the royal family are especially eager to spread the wealth because whenever either the king, queen or prince appear anywhere on the Rising Royals reels, the special Symbol Upgrade Meter; situated on each side of the reels; will glow brighter and brighter yet. The meter is presented in the form of a glitzy royal palace chandelier and makes for a dizzying display of light each time it lights up.

But the royal light show is nothing compared to what transpires when royals appear on the slot’s reels during three consecutive spins because this is when the Symbol Upgrade feature comes into play. The feature transforms all high-paying symbols present on the reels into an even higher-paying symbol.