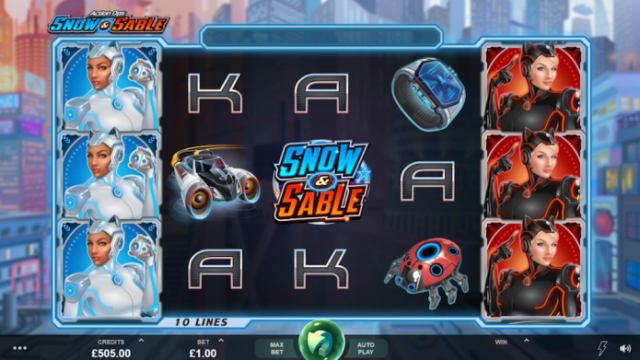 We’re heading into our favourite time of the year: December and the Christmas holidays. It’s all about the festive season, giving, the snow, the lights, and Santa. But for us, it’s our favourite time of the year because it’s when developers tend to pull out all of the stops to ensure that we have exciting games to play as we approach jolly-season.

Thanks to Microgaming and independent developers Triple Edge Studios, 2018 is bound to be one for the books. The casino software giant has just announced the release of Action Ops: Snow & Sable, the latest in their line of sci-fi online slots. The game is available at all participating operators.

Action Ops: Snow & Sable is a crime-fighting action slot set in the distant future. Players are invited to join the dynamic duo in their quest to rid the world of all that is bad by unlocking special features such as Mixed Wild Pays, Free Spins, and Stacked Wilds.

The stars of the show appear on the reels at high-intensity intervals, and also act as the wild symbols of the game. Individual wins as well as combined combinations are at the order of the day with these crime-fighting wilds in the mix. Scatter symbols make for even more exciting game-play as these trigger high-paying free spins rounds. 10, 15, and 20 free spins are up for grabs; all depending on how many scatters triggered the bonus round.

When A Bonus Really Is A Bonus

The free spins rounds are very exciting indeed as these present players with winning combinations all the way, thanks to Snow and Sable appearing on every single spin. They often make reels 1 and 5 fully wild, which of course translate into massive wins for players. Lovers of slots often bemoan the fact that it’s a major letdown when a bonus round is triggered and no real wins are to be had during that round.

Players are quite outspoken about the fact that they are never very keen to return to those particular games. The tendency is the making of a major anti-climax and there are more than enough games in the playing field so as to avoid the disappointment.

Thankfully, this is never the case with any of Microgaming’s slots. Bonus rounds almost always live up to their promises and players are generally full of praise for Microgaming-developed slots.

Get those reels spinning and those wins coming! Play top slots online NOW