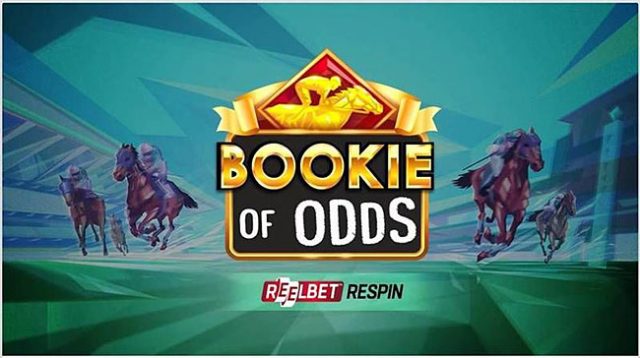 Microgaming never fails to impress, and thanks to the latest online and mobile slot created by Triple Edge Studios, it appears that the developer has done it again. This time around in true horse racing style.

It’s a typical day at the races in Bookie of Odds, and its full-steam ahead out of the gates for the five-reel, 10-payline slot. Wilds, scatters and free spins abound, and it’s the special REELBET re-spin feature that really chases this happy horse all the way home.

There are colts, jockeys and of course a bookie on the game’s reels, and one can hardly wait to punt away on all of the horse-racing action just by looking at the opening scene. The camera zooms in on the animal-athletes storming towards the finish-line and one can almost see the flare of the nostrils; feel the rush of their unbridled adrenaline.

A Multiplier That Grips The Bit

The Bookie’s Tip Book doubles up as both the wild and the scatter. Three or more of either is the making of 10, 12 or 25 free spins. Once triggered, an expanding symbol is revealed at random, and this symbol is able to extend over entire reels when landed. It acts as a tremendous boost during the bonus round, and when activated, can mean up to 5000x the player’s bet.

Now that’s the kind of multiplier that really wins at the races! But that’s not all that is unique about Bookie of Odds. A one-of-a-kind strategic edge has been incorporated into the game’s re-spin feature. Players are at leisure to spin away at the bonus game’s reels at variable cost. This ups the ante and plays around with the odds, and in so doing creates truly unique chances at winning scores of cash.

Having a horse in this particular race sure is worth the effort!

It’s a thrill a minute at this particular racing event, and the excitement continues to build as the action progresses. According to David Reynolds, Games Publisher at Microgaming, thanks to the free-spirited team at Triple Edge Studios, Bookie of Odds is a fresh new take on horseracing season, made all the more exciting by the fact that a day at the races is now available to online and mobile slots fans.

Everyone is invited, and with a 5000x bet multiplier in the equation, there’s absolutely no time to be wasted in saddling up!

Ready to spin the reels and get winning?
Play the top slots ONLINE now!