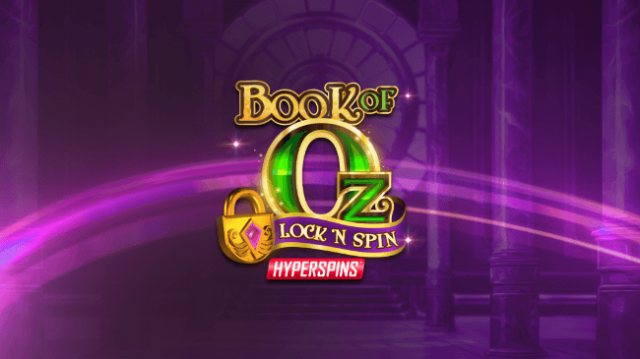 Those who enjoyed Microgaming’s celebrated Book of Oz slot will be happy to know that the casino games giant has just released the second chapter in the acclaimed series. Book of Oz Lock ‘N Spin was developed for Microgaming by independent developer studio partner Triple Edge Studios and according to the latest news hot off the casino news press, the follow-up instalment is set to make even more waves than what did the original December 2018 instant-hit release.

But what is it that makes the Book of Oz concept to be so enormously popular? Its all about the inside-mechanics, says Microgaming. The very idea lends itself towards the inclusion of super spins and bonuses and magnificent money runs. And judging by the official slot-release information, the second chapter in the Oz series has been primed to impress even more than the initial game.

Book of Oz Lock ‘N Spin isn’t for the timid. It’s high-volatility pace of play at a million miles a second. Five reels and ten paylines make up the playing field and the two star features of the game, namely Hyperspins Lock ‘N Spin and 2nd Chance complete the thrilling package.

The piece de resistance is without a doubt unlocking the Hyperspins Lock ‘N Spin during the base game. The feature will lock anything up to a total of 4 of the slot’s 5 reels into position for an additional single spin. It’s not at all difficult to imagine the variety of wins to be had when this happens during play. The wins are massive and if the player is really lucky, the free spins round will be kicked into motion by landing 3 or more of the Book scatter symbols anywhere on the game’s reels.

The magic of landing the Book symbol in a scattered set of three or more anywhere on the reels will instantly unlock 10, 12 or 25 free spins, depending on whether 3, 4 or 5 scatter symbols were landed.

Once the free spins have been set in motion, players will be awarded an additional special symbol that will expand and create even more win opportunities. This also happens to be point at which players are presented by an added bonus in the form of 2nd Chance. This feature allows players to either stick with the original additional symbol awarded to them, or to re-shuffle the odds, so to speak, allowing the game to randomly select a different symbol. Choose wisely, as fate could go either way at this point.

Microgaming’s Book of OZ Lock ‘N Spin is now live, and can be enjoyed on desktop and mobile.

Spin YOUR way to a JACKPOT win. Play the best slots in Canada ONLINE!