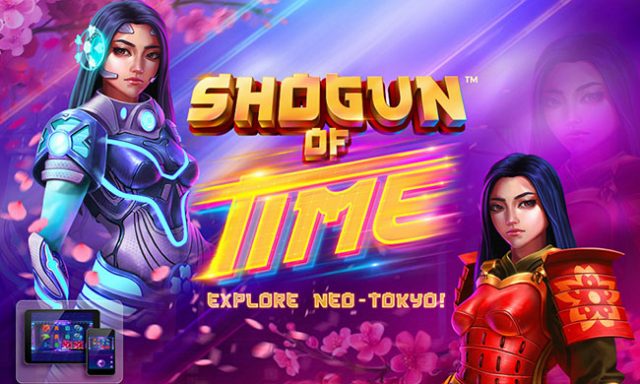 Microgaming and Just For the Win have announced that a brand new slot is on the way for a February release! Shogun of Time will reportedly be an action-packed title with a unique Japanese cyberpunk theme and a slew of innovative bonus rounds developed specially for modern players.

Inspired by the streets of Tokyo, the upcoming title has fused traditional Japanese elements with a futuristic setting for a very unique take on two classic themes. The game play will take place across 4 reels and 81 ways to win to start with, but the reel set can be expanded to 5 reels and 243 ways to win as well.

The game will start off with the lower number of reels and ways, but if you manage to land a 4-symbol combo during any of your spins, the title’s Re-spin and Reel Splitter features will commence. Here, another reel will be added in the center of the set while the other 4 are locked into place for a single respin, creating the potential for a screen full of profitable symbols

Also on the menu for bonus aficionados is a range of scatters, wilds, free spins, and a few other choice additions. Play your cards right and you could win up to 2,000x your base game stake in Shogun of Time, meaning that you could win as much as $200,000 in a single spin when playing the game at its maximum bet.

Speaking of maximum bets, the top stake in Shogun of Time is 100.00 per spin. The smallest wager possible per spin is an affordable 0.10, which gives every player a chance to join in the action.

Up to 16 Futuristic Free Spins

As for the free spins, they can be triggered by landing three or more scatters on the screen in tandem. Landing 3 scatters will award you 8 free spins, while landing 4 scatters will grab you 16 free games to play with. The reel set will again expand by one reel in this feature, and the center one will reportedly lock in place here too to create a full stack of sticky wilds. Only the surrounding 4 reels will spin.

Shogun of Time’s fusion of Japanese glam and cyberpunk grunge has created a special and memorable theme, which, according to experts, has been extremely well designed by JFTW. Symbols to look out for include the cyberpunk girl, specialized logos, armor, Samurai helmets, and flowers, while lower paying wins are supplied by clubs, spades, diamonds and hearts.

Get those reels spinning and GET WINNING!
Play top slots online today.