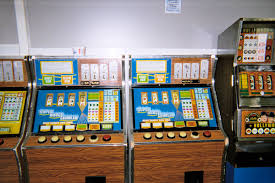 When you enter the casino slots room you might find “fruit machine games” as one of the slots alternatives. Some players specifically search for fruit slots which they find to be easier to play and offer a more well-rounded slots event. So exactly what are fruit machines? How do they differ from the video slots to which you are accustomed?

Identifying the Freemarket Casinos for Canadians

The first slot machines were developed by Charles Fey who created the “Liberty Bell” in the late 19th century. The machine featured playing cards as symbols along with a patriotic Liberty Bell. The machine quickly became a popular game. By the early 1900s Fey’s Liberty Bell had evolved and the new machines displayed fruit symbols. These machines, called “fruit machines” were generally located in pool halls and salons and were placed there to provide the patrons with a bit of diversion from their drinking and card-playing. Those early fruit machines were so named because of the fruit symbols that appeared on the three reels. Winnings were paid out in the form of chewing gum, with the type of gum that you received being determined by the symbols that lined up on the reels of your spin. If you achieved three cherry symbols, for instance, you would receive cherry-flavoured gum. Through this system the proprietors of the pubs described their pub fruit machines as “chewing gum dispensers” and thus, were able to slip under the radar of government officials who often raided the drinking establishments to enforce anti-gambling laws. Later, drinks and other pieces of candy were added to the prize options for fruit machine wins.

When the early casinos were built in Las Vegas in the 1940s they incorporated slot machines into the game line-up. Casino operators immediately noted the games’ popularity. The fruit machines became increasingly sophisticated and new revisions and modifications were made. Over the course of the next few decades new elements were added.

Some of the most significant changes that were made included the bottomless hopper, the electromechanical arm and the automatic payout. These three elements combined to make fruit machine gaming an event at which players could play and collect their prizes without the need for an attendant. In 1976 the fruit machines adopted an innovated that incorporate logic boards to regulate all slot machine functions. Another step forward took place in 1996 when the Reel ‘Em In game was launched. This involves a second-screen bonus feature in which the regular game pauses while a second game function appears to offer. additional win options.
Today some players still enjoy playing the traditional fruit machines with their simple symbols, limited number of paylines and three reels. Others choose the latest 21st video slots which are based on the fruit machines but offer more symbols, more features and options for themed games. Millions of land-based and online casino players choose gaming machines thanks to the added excitement that these machines add to their casino adventure.

Slot machines, including fruit machines, went online in the 1990s as soon as online casinos opened on the Internet. The online gaming alternative offers players the opportunity to play at their convenience from the comfort of their own homes. Online players have learned to appreciate the differences between casino-based gaming machines and online slots such as the advantages of convenience and the higher payouts. (Payout rates for online fruit machine are higher than the prizes given out at land-based casinos since web casinos’ have lower operating costs which allows online casinos to pass the savings on to their clients in the form of bigger rewards and better bonus packages.) In addition, pub fruit machines online gamers can access their favourite gaming machines 24/7 at the online casino so they can play at their leisure any time and from any location.

How to Play Fruit Machines and other Types of Slots

When you play one of the fruit machines or other slot gaming machines you aim to create winning combinations of game symbols along the machine’s paylines. You make deposits on the paylines that you want to enable. Some gaming machines have low numbers of paylines — from five to nine. If you’re playing a video slot machine you can find machines that feature up to 300 paylines. The combinations that you achieve on enabled paylines will trigger winning payouts but if a combination appears on an unenabled payline, no payout is given.

Each machine has a minimum and maximum number of coins that you can bet on a payline. You can bet different numbers of coins on different paylines but it’s a good idea to bet something on each payline so that every completed combination will present you with a win.
After you activate your paylines you spins the reels. Three matching symbols, or two symbols plus a Wild symbol, indicate a win. As with the fruit machines of years ago which gave out flavours of gum depending on the fruit symbols that appeared on the reels, you’ll receive different payouts based on which symbols line up on the paylines. There are high-payout symbols that enable you to realize the game’s highest payout along with more moderate payout symbols for lower wins.

Along with the base game, many gaming machines offer additional elements. Today’s newest releases generally present the most interactive and dynamic game features with elements such as free spins rounds, gamble games, 243 Ways to Win, exploding symbols, stacked symbols, expanding wilds and more. You can take your pick of gaming machine plots, ranging from the basic fruit, letter and number symbols on the fruit machines to games with imagery and graphics that depict storylines of romance, mystery, intrigue, magic, animals, sports, mysticism, history, mythology, humor, whimsy, culinary arts, travel adventure and more.

Some of the most popular fruit machines in the industry were developed by the Microgaming software company. These include Pub Fruity, Lucky Barstand, Stallionaire Pub, Dubya Money, Apocalypse Cow, Fire ‘n Dice, Fruit Bingo and Max Damage and the Alien Attack.
Fruit machines harken back to the classic slots that gamers would enjoy over a pint of bitters at their neighborhood pub. You can relive those times as you achieve real money wins when you play online fruit machines and other slots at the online casino.