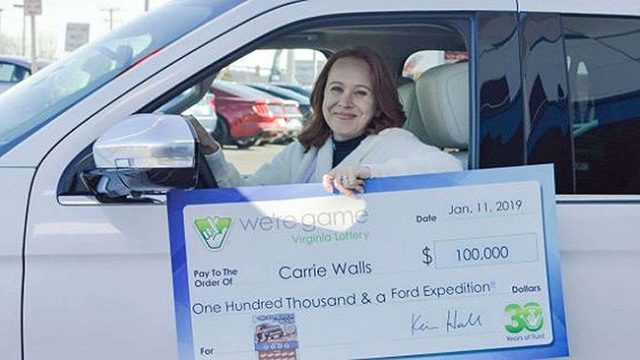 A family that has been battling to make ends meet after the US government shutdown has seemingly managed to win the favor of Lady Luck herself. The wife of the clan recently won a cool $140,000 in a local lottery, giving them a much-needed boon during a difficult time for many.

Hundreds of thousands of government workers in America are living without salaries due to the partial shutdown, which is now nearing its first full month. This is the longest governmental shut-down in US history, breaking the previous record of 21 days held by Bill Clinton’s presidency since 1996.

However, for Virginia resident Carrie Walls and her family, her winning lottery ticket has ensured them some security and a means to get by for a few months without their regular payslips. Carrie’s husband, who has remained unnamed, is one of the countless federal employees who have been negatively impacted by the saga.

Mr Walls was meant to be paid on Friday, January 11 – incidentally, on the same day that his wife collected her winnings. Carrie Walls herself was also governmentally employed for a while, having served in the US air force for more than a decade.

According to the woman of the house, her initial lottery ticket was a loser, so she re-entered it into the Virginia Lottery’s special draw. While she wasn’t expecting to win anything substantial, she quickly discovered that she had actually won the game’s top prize: $140,000 in cash and a brand new Ford Expedition.

Over 554,000 entries were made into the competition, meaning that Walls somehow managed to beat odds of 1,387,200 to 1 in order to scoop the top prize. This particular competition offers multiple rewards that range in value from $5 to the $140,000 grand prize that she took home.

Speaking about her win to media personnel, Carrie Walls admitted to crying when she discovered that she had won big. Apparently, she couldn’t believe her fortune at first, but once the news sank in, she quickly began to make some plans as to how she would be spending he new fortune.

The family is now planning to use some of the winnings for a trip to Disneyland soon, which they had already had planned before the shutdown hit them with hard times. Unions representing the government workers who have not been paid have sued Trump’s polity, demanding that their members be fully compensated for both the time and the overtime that they have worked.

In response, Congress was quick to pass new legislation that guaranteed back pay for the unpaid federal employees.