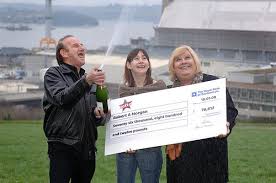 In 2014 Canada was captivated by the tale of an unclaimed $50 million lottery ticket that had been sold in Langley British Columbia. For almost a year, the lottery identify of ticket’s owner remained a mystery. Days before the ticket was set to expire, the winners came forward. It turned out that the winners, Friedrich Mayrhofer, his wife, Annand, and son, Eric, had known for most of the year that they were the winners, but they had delayed claiming the prize at first to ascertain whether they could claim it anonymously (they couldn’t) and then to set up financial plans and investments to ensure that the money would be properly used.

Winning tickets worth tens of millions of dollars go unclaimed every year in Canada. In Ontario alone, winning tickets worth more than $21 million expired during the fiscal year 2014-2015, having never been claimed. These tickets represent just over one percent of the $1.8 billion that the OLG paid out during that year. Although that sum dwarfs in comparison to the actual payouts, it is still a significant loss to lottery players whose lives might have been changed for the better by their win.

What happens when a winning ticket remains unclaimed?

Under the rules of the Ontario Lotteries and Gaming Corporation, which operates the Ontario lottery, ticket holders have one year to claim their prize. That’s roughly the same amount of time that other provincial lotteries give to their own lottery players. Most unclaimed prizes are small prizes, ranging in amounts from $2 to $100. But, prizes involving larger sums are not unheard of. “It could be a $5 prize on a [Lotto] 6/49 ticket that gets stuck in a purse or a glove box,” OLG spokesman Don Pister said. “Or a two- or four- or 10-dollar prize on an instant ticket that someone scratches and … doesn’t get around to going to a retailer and claiming those smaller prizes.”Pister said that it’s rare occurrence when a winner doesn’t claim a major prize as defined as $10,000 or more. But it happens.

The lottery corporations make a tremendous effort to identify big winners, as evidence by the story of Kathryn Jones of Hamilton. Jones was a random lottery player but in 2013 she bought a $16 Lotto Max ticket at her local Shoppers Drug Market. Not only did she forget about the ticket purchase, but she lost the actual ticket.

In a month-long investigation OLG investigators searched transaction history and security tapes from the Shoppers Drug Mart, where the ticket was purchased in an effort to identify the winner of the lotto. They were able to point to Jones as the rightful winner by first determining that Jones had purchased the only $16 ticket sold that day at the market. They contacted Jones and conducted an inquiry, including an independent review of her sister who owns a retail outlet in Ottawa that sells lottery products.  In December 2013 Jones was awarded her prize, astounding everyone who heard the story of how tenacious OLG officials were able to track her.

The story about Jones goes a long way in providing a picture of how far the Lottery Corporations will go towards identifying lottery winners. Other provinces also have backlogs of wins. A combined total of $2.4 million in unclaimed winnings from regional draw games is sitting in the coffers of the Atlantic Lottery Corporation from lotteries played in New Brunswick, Nova Scotia, Newfoundland / Labrador and Prince Edward Island. These prizes include payouts that are worth between $1 and $100,000, said ALC spokeswoman Christine Manore.

The provinces don’t even keep track of major wins from Canada-wide lotteries. The Lotto 6/49 and the national Lotto Max are operated by a national body on behalf of provincial and regional lottery corporations and details about unclaimed national prize money from the national lotteries is not available.

Unclaimed Funds – Where Does the Money Go?

Despite the best efforts of the lottery corporations, their investigators and the press, some lottery money remains uncollected. Since lottery tickets are good for a year, what happens to the funds after the year has ended?

For Canada-wide draws such as the Lotto 6/49 and the Lotto Max, expired and unclaimed prize money goes back to the national lottery fund and is designated to be used for future promotions or draws.

Regarding provincial lotteries, the rules vary from province to province.

Christine Manor, spokesperson for the Atlantic Lotteries Corporation, says that in Atlantic Canada, unclaimed prizes from games that are available only in the Atlantic Region, such as Salsa Bingo and Tag, Twist, are used in part for subsequent lottery draws or promotions to ensure that unclaimed wins go back to players in the form of prizing.” Don Pister says that, for Ontario-only lotteries and games, such as the scratch-and-win games, unclaimed money goes back to the provincial government.

Sometimes “things happen” but there are steps that you can take to keep your lottery ticket safe and ready to submit a claim. Don Pister of the Ontario Lottery Corporation says ‘If it’s an instant ticket, scratch it right away, see if you’ve won. If it’s a draw game, please check our winning numbers shortly after the draw.”

For once-a-week draw tickets, it’s always a good idea to have a set place where you place your ticket, so you know where to look if you want to check the ticket. For winning tickets worth $10,000 or more, the lottery corporation will send a news release to media outlets in the locale where the ticket had been purchased to alert people that there’s a winning ticket in the area. Having your ticket on hand to check the winning numbers takes a lot of the stress out of waiting for the investigators from the lottery corporation to track you down.